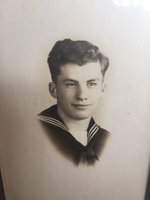 Mr. Norbert “Moe” Slezak, 91, of McQuade Road, Amsterdam died peacefully on Thursday June 7, 2018.  Born in Amsterdam on February 17, 1927 he was the son of the late Lawrence and Josephine Grybos Slezak.

A lifelong area resident, Moe graduated from the former Wilbur H. Lynch High School.  He went on to serve proudly in the United States Navy during WWII as an electrician in the Pacific Theater.  Moe returned to Amsterdam where he was first employed at General Electric and later the Watervliet Arsenal until his retirement.

Moe was an avid fan of the Mets and the NY Giants.  He enjoyed fishing, hunting, gardening and being outdoors.  He was a member of the East Branch Hunting Club.  He will be sadly missed by all who knew and loved him.

On March 22, 1969 he was united in marriage to Delores M. Coalter.  That union lasted 42 years until her passing on October 7, 2011.  He was also predeceased by his daughter, Sandra Slezak; and his siblings, Anthony, Chester, Raymond, Anna and Stella.

A Mass of Christian Burial will be offered on Saturday, June 9, 2018 at 11a.m. at St. Stephen’s Roman Catholic Church, 51 N. Pawling Street, Hagaman, New York.  Burial will follow in the parish cemetery with military honors.  Calling hours are private for the family.

In lieu of flowers, memorial contributions may be made to the Montgomery County SPCA, P.O. Box 484, Amsterdam, NY 12010.  Arrangements have been entrusted to the care of Betz, Rossi & Bellinger Family Funeral Home.  Please visit the online memorial at www.brbsfuneral.com