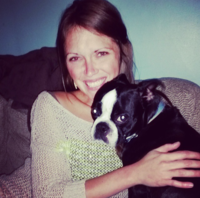 Erin Regina (Vertucci) McGowan of Amsterdam, New York passed away tragically with her husband and good friends on Saturday, October 6th, 2018 at the age of 34.

Erin was born to Lynne M. (Vertucci) Semprivivo on December 20, 1983 in Niskayuna, NY.  She attended Amsterdam schools and later graduated from Fonda-Fultonville Central School in 2003. She received her Associate’s Degree from FMCC and later studied at Utica College and the College of St. Rose in Albany. She spent time working at the New York State Thruway and First Niagara Bank and she most recently worked at St. Mary’s Pediatrics in Amsterdam and the Family Counseling Center in Gloversville.

She married the love of her life, Shane McGowan on June 8, 2018. Together they enjoyed being with friends and family and traveling, especially to the ocean. She spent many summers on Cape Cod, Cape May, and Pine Lake with her family. She was a proud dog mom to her Boston Terrier, Remmy. Erin lit up any room with her big beautiful smile. She was a beloved daughter, granddaughter, sister, cousin and friend.

A Mass of Christian Burial will be celebrated for Erin and her husband Shane on Monday, October 15, 2018 at 11:15 AM at Historic St. Mary’s Roman Catholic Church, 156 E. Main St. Amsterdam, NY with Father Jeffrey M. L’Arche as celebrant. Interment will follow in St. Casimir’s Cemetery, Amsterdam.  The family will receive relatives and friends of both Erin and Shane on Sunday, October 14, 2018 from 2:00 to 6:00 PM in the Body of the Church of Historic St. Mary’s, 156 East Main St., Amsterdam, NY.  In lieu of flowers the family request donations are made to the First Responders of Schoharie County or to the Montgomery County SPCA.