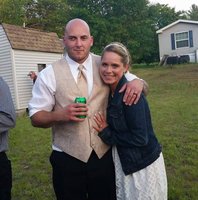 On Oct. 6, 2018, Richard Steenburg Jr. lost his life unexpectedly in an automobile accident, alongside his best friend and brother, Axel, sister-in-law, Amy, and several close friends. Rich was born and raised in Gloversville, N.Y. He is survived by his parents, Janet Steenburg (Dutch Andrews) and Richard Steenburg Sr., his brother, Eric Steenburg, his wife Kimberly Steenburg, whom he married on June 11, 2016, and his two children, Aubrie Steenburg and Owen Christman.

Rich was a wonderful father and stepfather who always let his little girl paint his nails and have tea parties together. Whenever a new marvel movie came out, he looked forward to letting Owen skip school to see it, and they would make a day of it. He loved them so much and was so proud of who they are. And they loved their daddy and “It” as Owen used to call him.

In addition to his immediate family, he is also survived by several aunts, uncles, cousins, and close friends. All who had the pleasure of knowing Rich will remember him, in particular, for his wicked sense of humor, and the way, only he had, of making a room light up the second he entered it. He had many hobbies; his favorites included going to the gym and his weekly Dungeons and Dragons game with his buddies.