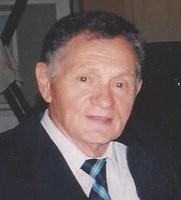 Joseph F. LaPorta, age 89, of Gloversville, passed away peacefully on Saturday, November 3, 2018 at Nathan Littauer Hospital Nursing Home with his family by his side.

He was born May 28, 1929 in Gloversville, the son of the late Clemente and Assunta DeCristofaro LaPorta. He served in the US Army during the Korean War. He was employed at The Leader Herald for  over 40 years and retired as a printer in 1992.

Joe had great faith and was an active member of the Church of the Holy Spirit where he served as an usher and a Eucharistic Adorer. He was also a member of the Knights of Columbus Council #265.

He was a kind and compassionate man who above all enjoyed spending time with his grandchildren and great-grandchildren.  He enjoyed playing tennis until his late 70's. He was a lover of nature and animals.

In addition to his parents he was predeceased by a brother, Frank LaPorta.

The family will receive relatives and friends from 4 to 7 p.m. Wednesday, November 7 at Walrath & Stewart Funeral Home, 51 Fremont St; Gloversville, where a Prayer Service will be held 9:15 a.m. Thursday, followed by a Mass Of Christian Burial at 10 a.m. at the Church of the Holy Spirit, 151 S. Main St; Gloversville, with the Rev. Matthew Wetsel officiating.