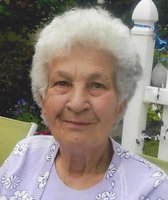 Antonia "Toni" G. Van Skiver of Gloversville, (Meco) passed away peacefully on Sunday December 9, 2018 with her loving family by her side.

She was born in Amsterdam, into a large and in charge Italian family, on May 4, 1929. She was a daughter of immigrants from Pisciotta, Italy; the late Remo and Carmela (Martuscello) Puglia.

She graduated from Wilbur H. Lynch High School in Amsterdam in 1948 and she worked in various carpeting and button mills in Amsterdam. On June 25, 1950 she married Frank A. Van Skiver and moved to Gloversville. He died on December 16, 2016.

She and her husband owned and operated Van Skiver's Trucking in Gloversville for over 30 years.  They also worked a labor of love at Van Skiver's Cabins at the Great Sacandaga Lake where her favorite activity was talking with her children while watching her grandchildren and great-grandchildren play on the beach with a backdrop of white waves and a pink sunset.

She also greatly enjoyed working at Avery's Inn, Arietta as a waitress and "chief cook and bottle washer."  She served as a Brownie and Girl Scout leader.

Mom was so loved by her family. She was like sunshine mixed with a little hurricane, she had caring and loving intentions given with her best bossy and strong willed advice.   She was a passionate wife, an unconventional mother, a fiercely loyal friend, a generous person who never let anyone leave her home hungry ("Mangia"!). She took great pride in her cooking and made from scratch spaghetti sauce and apple pies were legendary. She loved to be outdoors, working in her vegetable garden or tinkering with whatever needed to be “fixed.”  She was unpredictable in whatever her next adventure might be but very predictable that she was late to most everything.  Her children said she ran on her own clock, called "Toni Time". Every event was always made better when she finally arrived.

She is also survived by her siblings Carmen (Tina) Puglia of Maryland, Felicia Persico of Amsterdam and Frank (Kathy) Puglia of Tribes Hill as well as several nieces and nephews.   She was predeceased by sisters Rose Giardino, Mary Skotarczak and Giovanna Plisinski.

The family will receive friends from 4 to 7 p.m. Thursday, December 13 at Walrath & Stewart Funeral Home, 51 Fremont St., Gloversville. A Mass of Christian Burial will be celebrated at 10:00 a.m. Friday at the Church of the Holy Spirit, 151 S. Main St; Gloversville, with the Rev. Matthew Wetsel officiating. Interment will take place at St. Mary's Cemetery, Fort Johnson.

Memorial contributions may be made to Johnstown Public Library, 38 S. Market St., Johnstown, NY 12095 or the Shrine of Our Lady of Martyrs, 174 Shrine Road, Auriesville, NY 12016 would be especially meaningful.