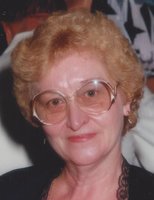 She was born April 20, 1936 in Gloversville, the daughter of the late Leon and Marvel Johnson Murray. Nancy was a 1952 graduate of Mayfield Central School. She was bookkeeper/office manager at Burton Insurance Agency in Gloversville for 33 years until her retirement.

Nancy was a member of the Foothills United Methodist Church, the Friends of the Gloversville Public Library and a 25-plus year member of the Insurance Women of Fulton County, where she served as President. She enjoyed reading, crocheting and puzzles. Most of all, Nancy enjoyed spending time with her grandchildren and great-grandchildren.

In addition to her parents, Nancy was predeceased by a sister, Ruth Morris and her husband Ron; and a daughter-in-law, Linda Bump Stanzel.

The family will receive relatives and friends from 4: to 7 p.m. Thursday, December 20, at Walrath & Stewart Funeral Home, 51 Fremont St, Gloversville, where a Funeral Service will take place at 10 a.m. Friday.

Memorial contributions may be made in lieu of flowers to the Gloversville Public Library, 58 E. Fulton St; Gloversville, NY 12078.