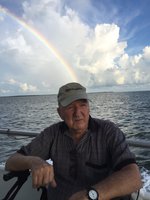 Born in Amsterdam on October 19, 1928 a son of the late Paul and Mary Trzaskos and lived the majority of his life in the Amsterdam Area.

Mr. Traskos served in the Army after graduating from the Amsterdam High School and became a meat cutter after leaving military service.  He worked for a number of local markets until finishing his career with Price Chopper Markets in Amsterdam.  He and his wife enjoyed camping and traveling around the country.  They made four cross country journeys with their camper to visit family in Alaska, taking in the national parks along the way.