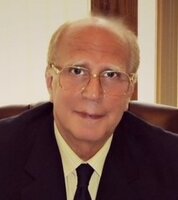 George E. Abdella, age 79, of Caroga Lake, passed away at his home Sunday morning, March 20, 2022 in the company of his loving family. He was born March 10, 1943 in Gloversville, the son of Ernest and Sophie Rosen Abdella.  He was a graduate of Gloversville High School in 1961, Hobart College in 1965, and Albany Law School in 1969.  Upon his graduation from law school, he entered the practice of law with his father, becoming one of the areas foremost trial attorneys.  Soon after becoming a lawyer, he met Estee Middle School teacher Ruth Boeker, and the two fell in love. They were married on June 26, 1971.  Sophie and Bobby followed in 1974 and 1975.

There was no more perfect marriage than that of Ruth and George.  They were inseparable, sharing not only the love of family, but a love of life and the never-ending quest to have a good time.  Whether it was weekends at the "camp" in Caroga Lake, trips to New York City or Vegas or the Caribbean, or for many years Friday happy hours at the Railyard, George, armed with his cigar and Bombay Gin and Tonic, with Ruth at his side, was the life of the party.  He loved music, especially Jazz.  He was an avid piano player.  He was funny without knowing how to tell a joke.  His humor was often not encumbered by modern standards of appropriateness.

When it came to the practice of law, he was one of a kind.  As a criminal defense and personal injury attorney, he won several high-profile trials including the successful defense of several murder cases.  He cowered to no one and no situation.  He fought for his clients with passion and dedication.  He genuinely cared for his clients, no matter their background.   His mantra was to do right by his client irrespective of personal profit.  Though a zealous advocate for his clients, he was loved by his fellow attorneys.  The capital region’s foremost attorneys each have a battle story of travelling to Fulton County to take on George Abdella and his unique brand of advocacy.  In 2000, George invested substantially in downtown Gloversville by rehabilitating the Abdella Law building at the four-corners in Gloversville into the beautiful structure that stands today at the center of town.

In 2004, George and Ruth moved full time to Caroga Lake.  They dedicated their lives to their family and grandchildren, of whom they were incredibly proud.  They were also dedicated to Caroga Lake, first restoring then donating Shermans Park.  He made countless donations to the community.  He was instrumental in bringing music festivals to Caroga Lake and was at the heart of recent revitalization efforts.

George is survived by his daughter Sophie and son-in-law Brian McDermott, his son Bob and daughter-in-law Erica Abdella, his sister Eleanor and brother-in-law Gabe Doumato, his brother Robert Abdella, his four grandchildren George Abdella, Cameron Abdella, Colin McDermott and Abby McDermott, as well as several nieces, nephews and cousins.   In addition to his parents, he is predeceased by his wife Ruth, who died on February 2, 2018, after 47 years of the greatest marriage ever known.

The family will receive relatives and friends from 4 to 6 p.m. Friday March 25 at Walrath & Stewart Funeral Home, 51 Fremont Street, Gloversville.

Memorial contributions may be made in lieu of flowers to the Caroga Arts Collective, P.O. Box 1048, Caroga Lake, NY 12032.