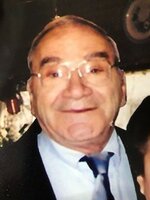 He was a 1949 graduate of Gloversville High School where he enjoyed playing football.  After graduating he enlisted in the Naval Forces and served with the first Marine Aircraft Wing of the U.S.S. REPOSE AH16 that operating in Combat Korean Waters where he was awarded numerous medals during his time in the Korean War.  He was also involved in many organizations including lifelong memberships of the Knights of Columbus, the Concordia Singing Club and was also a member of the Catholic War Veterans.  He was recently awarded a 60-year star for membership of the National Letter Carriers Association.

Kiki married Yolanda B. Florio September 24, 1960. They were married for 60 years until her death in 2020.  They had five children together and devoted their lives to making a home and teaching their children core values.

Kiki worked as a letter carrier in Gloversville until his retirement.  During that time, he had almost every walking route in the city and could tell you just about everyone’s address off the top of his head.  He made many friends and enjoyed spending time with them in bowling leagues, attending MLB games at Yankee Stadium (as he was an avid Yankees fan like his father), the Cooperstown Hall of Fame games and the good ole days at “Quigleys”.  Above all else, he enjoyed the delicious meals prepared by his wife, Yolanda.

He was kind, generous and witty.  Kiki spent his retirement years doing odd jobs to keep busy and he was always willing to help anyone who needed it, especially his kids. The last ten years of his life were a struggle as he battled dementia and ultimately Alzheimer’s disease.  His family would like to thank the staff at the Shirley J Luck senior center day program “Good Times” and the Pine View Commons for their help in caring for him the last several years. Also, a thank you to the staff at the Extended Care Facility for their compassion and care during this past week.

There will be no calling hours and a private burial will take place.  Memorial contributions may be made to the Good Times Center (see above) so that they may continue the day program to help our aging seniors and their caregivers.

Arrangements have been entrusted to Walrath &Stewart Funeral Home, Gloversville. Online condolences may be made to the family at www.brbsfuneral.com