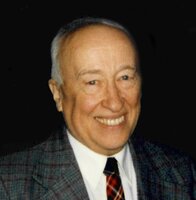 William Stewart Lambdin, “Bill,” age 97, died peacefully on Monday, May 9, 2022, of heart failure in Saratoga Springs, New York. He was born in Baltimore on February 26, 1925, the firstborn son of William Stewart Lambdin and Mary Magdalene Seeger Lambdin. His father was a bookkeeper, and his mother worked at the Aberdeen Proving Ground during WWI. Bill spent most of his early life in Frederick and Baltimore, Maryland, before moving to Gloversville, New York, in December of 1959. In 2013, two years after Bill’s wife of sixty-four years, Elizabeth Jane VanFossen Lambdin, “Betty,” died, Bill moved to the Wesley Community in Saratoga Springs, where he lived until his death.

Bill was a devoted son, husband, father, and grandfather. He selflessly took care of Betty for more than fifteen years as she progressed into the profound sorrow of Alzheimer’s disease. Although he was a child of The Great Depression, he was generous with his resources. His children and grandchildren could always count on receiving robust checks for birthdays, graduations, and Christmas.

Bill was noted for his smarts and was a Phi Beta Kappa valedictorian of his college class at Hamilton College, graduating in 1948 with a bachelor’s degree in physics and math. At Wesley, he delighted in playing Jeopardy, Trivial Pursuit, and Upwords. He participated in numerous spelling bees, and while a gracious loser, he had a competitive streak and enjoyed winning.

Bill was a lifelong spiritual seeker. He served as an ordained Elder at First Presbyterian Church of Gloversville, where he also added his warm baritone to the choir. He studied the teachings of Edgar Cayce, Gurdjieff, and the Indonesian mystic, Subud. However, Science of Mind, specifically Ernest Holmes’s body of work, spoke to him early and stayed with him throughout his life. In addition, he was active in several New Thought groups led by the Reverend Joanne McFadden (whom he adored) during his many happy years at Wesley. She said, “Bill was our patriarch, and we loved him dearly.”

Bill loved classical music, especially the piano compositions of Franz Schubert. However, his musical tastes were eclectic and included Scott Joplin and Patsy Cline. He had a robust sense of humor; Bill’s daughter, Beth, remarked that her father’s laughter would fill the house when he watched old black-and-white Laurel and Hardy films down in the basement when his brother, Thomas, visited. But, perhaps, most notable was his love of cats. Bill never met a cat he didn’t like, and he and chubby Sparky, a rescue from his daughter-in-law, Claudia, were great buddies in the final phase of Bill’s life.

He enrolled at Johns Hopkins University right out of high school in 1942 in an accelerated program. This acceleration (common during WWII) made him a sophomore when he joined the Army Air Corps (AAC) in 1943 to study meteorology shortly after his eighteenth birthday. However, the AAC overestimated the number of meteorologists needed and transferred him to the Royal Canadian Air Force in Clinton, Ontario, to study electronics before sending him to a select program in radar at the Massachusetts Institute of Technology in Cambridge, Massachusetts. Subsequently, he was a radar instructor at various locations throughout the States, including Fort Dix in New Jersey and Shaw Air Force Base in Sumter, South Carolina. While in the army, he earned college credits that transferred when he returned to academia, this time at Hamilton College in Clinton, New York. While Bill was finishing at Hamilton, he and Betty married on December 22, 1947. They honeymooned in New York City, which morphed into a winter wonderland when a surprise blizzard dropped over 26 inches of snow in Central Park and shut down much of the Northeast.

Bill joined Bendix Radio in Towson, Maryland, in 1948 as a junior engineer in radar development. He rose to Chief Engineer of the Air Traffic Control Radar department. He left Bendix in 1959 to become Chief Engineer of Empire Devices in Amsterdam, New York, which was sold to Singer Corporation in 1963. This sale prompted Bill and a group of eleven employees, including his partner Dale Samuelson to found a new company. While trying to establish themselves independently through stock issue, they received an offer from Fairchild Camera and Instrument Corporation to become a subsidiary, which they accepted. With Bill as General Manager, they opened the doors of Electro-Metrics in November of 1963, building specialized equipment to measure electromagnetic interference. Bill served as General Manager until retiring in 1985. The company grew to two hundred employees at its zenith and is still a going concern.

Along with Ed Bronaugh, Bill was the co-author of Electromagnetic Interference Test Methodology and Procedures, Volume VI, of a series on electromagnetic interference. “A winning title, no doubt” was how Bill recently described this technical book to his daughter.

He was a longtime member of the Institute of Electrical and Electronics Engineers (IEEE) and presented several technical papers at numerous symposia. As General Manager, he traveled to Switzerland, the Netherlands, and Russia to make presentations and teach courses. In a former monastery in Moscow, he taught Russian engineers how to use Electro-Metrics equipment.

Arrangements have been entrusted to Walrath & Stewart Funeral Home, Gloversville. Online condolences may be made to the family at www.brbsfuneral.com.
On Wednesday, June 29, 2022, the family will receive relatives and friends from 10:30 a.m. to 11:30 a.m. at the Saratoga National Golf Club, 458 Union Avenue, Saratoga Springs, NY 12866. A celebration of Bill’s life and a luncheon will immediately follow. The service will also be livestreamed. Please RSVP to Beth Lambdin through Walrath & Stewart for lunch by June 13, 2022, by calling 518-725-1121 or at obits@brbsfuneral.com. Use this same contact information to contact Beth Lambdin through Walrath & Stewart to obtain the link to the livestream closer to the date of the service.

Donations in honor of Bill may be made to newthoughtnewyork.org or the Regional Food Bank of Northeastern New York at regionalfoodbank.net.