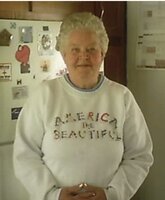 Edna Mae Voght, 82, of Fort Plain passed away on Wednesday, June 8, 2022 at Albany Medical Center surrounded by her loving family.
She was born on September 2, 1939 to Ray and Georgie Lewis of Hessville, NY. Edna attended and graduated from the Jamestown school district. She was married to the late Mr. Leonard E. Voght who passed away in 2005. Edna was a dedicated mother and loving wife who enjoyed being a homemaker and helping her husband on their farm.

In addition to her husband, Leonard, Edna was preceded in death by her parents Ray and Georgie as well as her son Leonard Voght Jr. and daughter Alberta Smith.

A graveside service will take place at a later date. In lieu of flowers donations may be made to Ayres Animal Shelter 133 Hilltop Rd Sprakers, NY 12166.