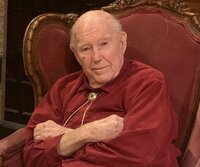 He was born on July 6, 1927 in Binghamton, New York, the son of Harold F. and Mildred H. (Fitch) Haines. Following his graduation from high school, he furthered his education at the Merchant Marine Academy, earning a Bachleor's degree in Math, Science and Navigation. Richard later took ownership of Yeide's Delicatessen in Union, New Jersey, and became a pillar of the community. Upon his return to Fulton county, he and his wife, Iris, joined  the Northampton United Methodist Church at Fish House.

Richard and Iris were married on July 8, 1950, and enjoyed sharing their lives together until her passing in 2016.

Richard was active in his community, not only at church, but also with various organizations. He was an Eagle Scout, which he received as a teen in Binghamton, NY. He was also a member of the Free and Accepted Masons of Broadalbin, a group he was involved with for over 60 years. In his spare time at home, he was known for his talent with woodworking. He loved crafting pieces for his family and friends, hand built cabinetry, and had a special knack for Adirondack Furniture.

He was predeceased by his wife: Iris J. (Graham) Haines; his parents: Harold F. and Mildred H. (Fitch) Haines; his son: Gary R. Haines; and his sister: Cynthia Darder.

A funeral service for Richard will be held at the Northampton United Methodist Church at Fish House on Monday. July 11, 2022 at 11:00AM with Pastor David Smith officiating.

Interment will take place immediately following the service next to his wife and son at the Northampton Cemetery at Fish House.
Contributions in lieu of flowers may be made in Richard's memory to the Northampton United Methodist Church at Fish House, 1605 County Highway 110, Broadalbin, New York 12025.

The Staff of Walrath and Stewart is honored to be assisting the Haines family.