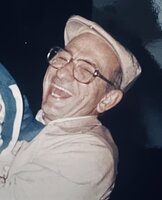 Born on January 23, 1930 he was the youngest child of the late Angelina Napoli Bucciferro and Antonio Bucciferro.  He attended the former Wilbur H. Lynch High School and was a parishioner of Our Lady of Mt. Carmel Church, formerly St. Michael’s Church.  After high school, he worked at the Mohawk Carpet Mill as a weaver.  In 1951 he was drafted into the United States Army during the Korean Conflict.  He served proudly as an Army Corporal First Class in the engineering division, working on the Osan, South Korea Air Field, which is still in use today.

Once he returned home, Bucky married the love of his life on May 9, 1954, Catherine Traina.  That union was blessed with 53 years of marriage until her passing on March 25, 2007.  Sadly, he was also predeceased by his youngest grandson, Daniel James Szala; and his brother, Biagio.

Bucky worked for a short time for GE in Schenectady before going to work for Electro-Metrics in Amsterdam until his retirement in 1995.  As a young man, he enjoyed hunting and fishing.  After retirement, Frank developed a passion for oil and water painting, and drawing, especially landscapes.  His greatest enjoyment, came from attending the Fonda Speedway.  If it was Saturday, you knew where Frank would be.  As a matter of fact, he attended a race at the track of champions as recently as two weeks ago, sitting in the infield with his family and friends.  A night not to be forgotten.

He is survived by his two children, Michael V. Bucciferro and his wife Felicia Petrosino and Kathy Szala and her husband Michael; two grandchildren Michael Alfonso Bucciferro and Nicole Marie Szala; nieces, nephews and cousins.

A Mass of Christian Burial will be offered on Monday, August 8, 2022 at 11a.m. at Our Lady of Mt. Carmel Roman Catholic Church, 39 St. John Street, Amsterdam, NY with The Very Rev. O. Robert DeMartinis V.F. as celebrant.  Entombment will follow in the family mausoleum in St. Mary’s Cemetery, Fort Johnson with military honors.