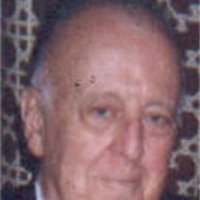 John S. Musillo, 91 of So. Hollywood Blvd., passed away Monday morning at Nathan Littauer Hospital. Born in Amsterdam on January 4, 1914, the eldest child of John Battista and Maria Maddelena Carretta Musillo, he was educated in Amsterdam and moved to Gloversville seventy years ago where he has since resided. During World War II, he worked at the General Electric Co. in Schenectady and later, for thirty years, was the manager of the Singer Sewing Machine Co. both in Amsterdam and Gloversville. He retired in 1975. At one time, he was the operator of the former ?Johnnies Tavern and Restaurant? in Caroga Lake. He was a communicant of St. Mary Of Mt. Carmel Roman Catholic Church and was a member of the Concordia Club, the American Contract Bridge League and a charter member of the New York State Sheriff?s Assoc. In earlier years, he managed and coached several baseball teams in Gloversville, including the American Legion league. Johnnie will be remembered for his keen sense of humor and jovial manner, which remained with him until the very end. In 1937 he was married to the former Marie Paterno of Gloversville. She died in 1973. On Sept. 26, 1981, he married the former Elizabeth Farley Montano who survives. In addition to his beloved wife, his loving family includes: A son, John S. and his wife Rose Musillo Jr. of Gloversville; A step-son, Charles F. and his wife Marie Montano of Gloversville; Two step-daughters, Lynn M. Montano of New York City and Diane and her husband Robert Tiberi of Hawthorne, NY; Two sisters, Domenica and her husband Clark Goodbred of Glens Falls; and Edith and her husband Marvin Cohen of Clifton Park; Three grandchildren: Gregory and his wife Kelley Musillo, Dean Musillo, and Kristen Musillo; Three great grand children: Sophia Miller, Nicholas and Anthony Musillo; Nine step-grandchildren, nieces, nephews and cousins. In addition to his parents he was predeceased by twin infant daughters: Carol Ann and Mary Elena, brothers: Carmen and William Musillo. Sisters: Margaret Chirico, and Antoinette Martin and Eda Musillo. The Mass of Christian Burial will be celebrated Thursday at 10am at St. Mary of Mount Carmel Church, Gloversville by the Rev. Paul Butler. Relatives and Friends are invited and may call Wednesday from 5 until 7 at the Walrath & Stewart Funeral Home, 51 Fremont St. Gloversville. Internment will be in Mount Carmel Cemetery, Johnstown. Contributions may be made to the Mark J. Hughes Fund in care of 171 Guy Park Avenue, Amsterdam NY 12010. Please visit the family?s guest book at www.brbsfuneral.com