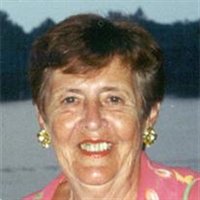 Mrs. Marion G. Quist, 79, of Philips St., Amsterdam, passed away Friday at St. Marys Hospital, Amsterdam. Born on September 26, 1925 in Albany, NY she was the daughter of Harold and Gertrude Shannon Dick. She graduated from high school in Albany and went on to graduate with a bachelors degree in education from Sargent College of Boston University. She was employed as a physical education teacher by the Amsterdam School District and the Utica School District until her retirement. She also served as a volunteer for the Elwood Museum and at Amsterdam Memorial Hospital, and St. Mary?s Hospital of Amsterdam. Mrs. Quist was a member of the Century Club of Amsterdam and was a communicant of St. Marys Roman Catholic Church of Amsterdam. She was predeceased by her husband Frederick T. Quist whom she married on August 2, 1947. He passed away on July 14, 1995. Mrs. Quist was also predeceased by a son Thomas P. Quist on May 3, 1990. Survivors include 3 sons, Frederick H. Quist and his wife Molly of Ft. Johnson, Edward F. Quist of Huston, TX, and Robert C. Quist of Ft. Johnson, NY; a daughter, Kathleen M. Janson and her husband Jeffrey of Scituate, Mass; a sister, Joan Bradley and her husband Richard of Cupertino, CA; 3 grandchildren, Kelly Quist, Erica Quist and Stuart Quist; and several nieces, nephews, and cousins also survive. Funeral services will be held on Tuesday at 8:15 a.m. at the Betz, Rossi & Bellinger Family Funeral Home, 171 Guy Park Ave., Amsterdam followed by a Mass of Christian Burial to be Celebrated at 9:15 a.m. at St. Marys Roman Catholic Church, E. Main St., Amsterdam with the Rev. Gulley officiating. The burial will take place in St. Marys Cemetery, Amsterdam. Calling hours will be Monday from 5 until 8 p.m. at the funeral home. Memorial contributions may be made in her memory to the Elwood Museum, 300 Guy Park Ave., Amsterdam, NY 12010. Please sign our guestbook at www.brbsfuneral.com.