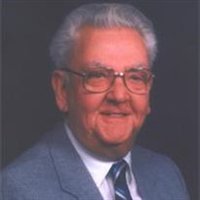 Mr. Harold W. White, age 84, of Gloversville, died peacefully on Monday, February 28, 2005 at Nathan Littauer Hospital, Gloversville. He was born April 25, 1920 in Johnstown, a son of David and Elsie Van Nostrand White. A graduate of Gloversville High School, he served in the Army from 1941 to 1945, including active duty in the European African Middle Eastern Theater Campaign. A self-employed heating contractor for many years, he operated White Home Improvement until his retirement. Mr. White was a member of the Church of Jesus Christ of Latter Day Saints, and a former member of VFW Post #2077, both of Gloversville. Survivors include his wife, the former Marie B. Wendt, also three children, Phyllis W. Hunt and her husband Terry of Nephi, Utah, Michael H. White and his wife Cynthia of Aubrey, Texas; and Eric R. White of Gloversville; his brothers Ernest White and his wife Irene of Mayfield, and Donovan White and his wife Donna of Gloversville, a sister Medora Venneman of Hollywood, MD; 17 grandchildren, and many great grandchildren. The family will receive friends from 4 to 6 PM Friday at Walrath & Stewart Funeral Home, 51 Fremont St., Gloversville, and from 11 AM to 12 PM Saturday at the Church of Jesus Christ of Latter Day Saints, Ext. Steele Avenue, Gloversville. A funeral service will follow at 12PM Saturday at the church with Elder Gilbert Tinney officiating. Interment will take place in the spring at Union Rural Cemetery, Mayfield.