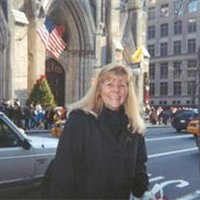 Bridget Derby Nabinger, 40, Vrooman Avenue, Mohawk, died Sunday evening at Albany Medical Center. She lived most of her life in Fonda, N.Y. until moving to Mohawk in 1995. Born May 11, 1964 in Amsterdam, New York, she was the daughter of Harry and Theresa Mahon Derby. She was a graduate of Fonda- Fultonville High School, Class of 1982, and she received her Bachelor Degree in Accounting from Empire State College. Bridget was employed as an Underwriter for the Partners Trust in Utica, N.Y. She was a communicant of the Blessed Sacrament Church of Mohawk. Survivors include her loving family; her mother, Theresa Vacek and step-father Henry of Johnstown; a son, Kristoffer Baker of Mohawk; two brothers, Donald Derby and his wife Karen of Fonda, and Matthew Derby and his wife Sherri of Tribes Hill, N.Y.; a step- brother, Henry Vacek Jr. of Johnstown, NY; three step- sisters, Lisa McNeil of Whitesboro, NY, Karen Woodman of Vermontville, Michigan and Cynthia Lawhorn of Nashua, New Hampshire; a maternal- grandmother, Ann E. Mahon of Fonda; aunts, uncles, nieces, nephews and cousins also survive. Bridget was predeceased buy her father, Harry Derby who died on her birthday May 11, 1986. A Mass of Christian Burial will be celebrated on Thursday, March 3, 2005, at 10:00 a.m. at the St. Cecilia?s Roman Catholic Church in Fonda, N.Y. with the Rev. Patrick Gallagher celebrant. Burial will take place in Evergreen Cemetery in Sand Flats, Fonda. The family will receive relatives and friends on Wednesday from 4 to 7 p.m. at the Jackson & Betz Funeral Home, 15 Main Street, Fultonville, N.Y. Memorial contributions may be made in her memory to the St. Jude?s Children?s Research Hospital, 501 St. Jude Place, Memphis, TN 38105 Please sign our guestbook at www.brbsfuneral.com.