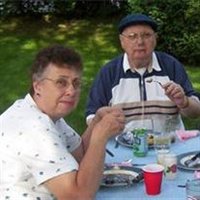 Mr. Leonard J. Kunicki, age 80, of Clyde St., Gloversville, died peacefully on Friday morning, February 25, 2005 surrounded by his loving family at Nathan Littauer Hospital, Gloversville. He was born September 21, 1924 in the Bronx, NY, the son of Joseph and Regina Karawanski Kunicki. He received a degree in Business Administration from Pace Institute now Pace University in New York City. He served in the Army Air Corps in the European Theater from 1943 to 1945. A Public Accountant by trade, he was employed at Beech-Nut in Canajoharie in 1966, at General Electric Co. from 1968 to 1972, at the State Bank of Albany from 1973 to 1975. He also worked at Kingsboro Lumber/Thorne Lumber, and as a people greeter at Wal-Mart in Gloversville from 1992 until several months ago. A self-employed Tax Specialist, he was also a former church organist at Sacred Heart, St. Mary´s and Mount Carmel Churches of Gloversville in the 1970´s. Mr. Kunicki was a member of Sacred Heart Church, where he was a charter member of the couples club, the Knights of Columbus Council #265 where he was a 4th degree member, and the V.F.W. Post #2077, all of Gloversville. On June 2, 1956 he was married to Gloria D´Achille who survives. Also surviving are three children, Leonard G. Kunicki and his wife Andrea of Gloversville, Gina M. Weil and her companion Sam Serafin of Johnstown, and Kathryn A. Brojakowski and her husband Blaise of Middle Grove; a sister Virginia A. DeBenedetto and her husband Ben of Brooklyn, six grandchildren, Jeffrey T. Kunicki, Robin Kunicki , Erich Weil, Scott Weil, Matthew Brojakowski and Jocelyn Brojakowski, several nieces and nephews including Stephen DeBenedetto, Joseph DeBenedetto and Benjamin DeBenedetto, and several cousins. The family will receive friends from 3 to 6 PM Sunday at Walrath & Stewart Funeral Home, 51 Fremont St., Gloversville, where a prayer service will be held 9:15 AM Monday, followed at 10:00 AM by a Mass of Christian Burial at Sacred Heart Church. Interment will take place in the spring at Mount Carmel Cemetery, Johnstown. Memorial contributions may be made in lieu of flowers to the Sacred Heart Church Building Fund, 189 Kingsboro Ave., Gloversville, NY 12078 or to the charity of your choice.