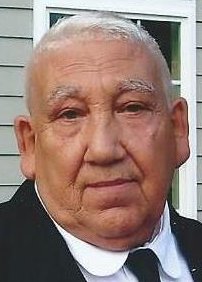 Born in Yauco, Puerto Rico on May 22, 1935, the son of the late Domingo and Manuela Ruiz Gonzales.  He attended school in Puerto Rico before coming to this area as a young man.

Mr. Gonzales was employed for many years as a forklift operator at the former Coleco Industries in Amsterdam.  He later worked for Keymark Corp. in Fonda.   He also worked for Sears and Mr. Bob Montenaro.

He was a member of the Spanish American Club and was a social member of the John J. Wyszomirski Post #701 in Amsterdam.  Hector was a communicant of the former St. Michael the Archangel Roman Catholic Church.

Hector enjoyed camping, walking and being in the outdoors.  He enjoyed spending time at Post 701 Post with his many friends.

The family will receive relatives and friends from 11:00AM to 1:00PM on Monday June 4, 2018 at the Betz, Rossi & Bellinger Family Funeral Home, 171 Guy Park Ave,  Amsterdam where a Funeral Service will follow at 1:00PM with Father Lawrence J. Decker presiding.    Interment will follow in Fairview Cemetery, Steadwell Ave, Amsterdam.  Memorial contributions may be made to the Montgomery County SPCA, PO Box 484 Amsterdam ,  NY 12010 or to the Autism Society of America, Albany Chapter, 2999 Hamburg Street,  PO Box 3847,  Schenectady, NY 12303.

To send flowers to the family or plant a tree in memory of Hector Gonzales, please visit Tribute Store
Print
Monday
4
June