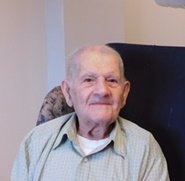 Mr. Dominick Bellen, 100, formerly of West Main Street, Amsterdam, NY died peacefully on Friday, June 8, 2018 at Baptist Health Nursing and Rehabilitation Center with his family by his side. Born in Amsterdam, New York on April 24, 1918 he was the son of the late Filipe and Asunta “Susie” Dulva Bellen.

During WWII, Mr. Bellen served proudly with the United States Army in the Asia Pacific Theater from 1942 – 1945.  He was a recipient of the Purple Heart and was discharged at the rank of Staff Sergeant.

For 23 years, Dominick was employed by the City of Amsterdam in the Sanitation Department.  He was a parishioner of the former St. Michael the Archangel Church and later St. Mary’s Roman Catholic Church.  He will be remembered for his love of his country, his faith and most of all his family.

On April 20, 1947 he was united in marriage to Marion Vertucci.  That union lasted 53 years until her passing on March 31, 2000.  He was also predeceased by all of his siblings, Mildred, Eleanor, Jennie, Mary, Virginia, Rose, Joseph, Carmen and Rocco.

The Mass of Christian Burial will be offered on Wednesday, June 13, 2018 at 11:15a.m. at St. Mary’s Roman Catholic Church, 156 East Main Street, Amsterdam with the Rev. Jeffrey L’Arche M.S. as celebrant.  Burial will follow in the parish cemetery with military honors.  Calling hours will be held on Tuesday, June 12, 2018 from 5 until 7p.m. at Betz, Rossi & Bellinger Family Funeral Home, 171 Guy Park Avenue, Amsterdam.

The family also wishes to thank Baptist Health for the wonderful care and compassion that was extended to Dominick in his final years.

Memorial contributions may be made in his memory to The Fisher House Foundation www.fisherhouse.org which is committed to helping families of Veteran’s.  Please visit the online memorial at www.brbsfuneral.com

To send flowers to the family or plant a tree in memory of Dominick Bellen, please visit Tribute Store
Print
Tuesday
12
June