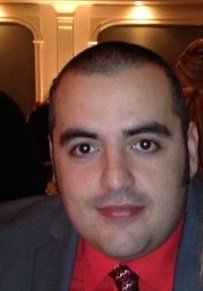 Robert grew up in Seneca Falls, graduating from Mynderse Academy, and Clarkson University with a degree in Engineering.  He was employed by Stebbins Engineering in Watertown, NY.

Robert was a member of the Star Spangled CrossFit gym in Watertown, where his wife Mary was a coach.  Robert also became a member of the Iota Kappa chapter of the Tau Kappa Epsilon fraternity in Fall 2003, while attending Clarkson University.  The people that he met while there became strong lasting friendships and he will be sorely missed.

Robert loved spending time with his wife, beautiful son, and family.  He had a great personality and was always there to make you laugh.  He enjoyed various sports, gaming, and building computers in his spare time.  Robert and Mary were both very active parents, always wanting to show Isaac the world.

A Gathering for Family, Friends & The Community will be held on Friday, October 12, 2018 from 3 until 7p.m. at St. Stanislaus Roman Catholic Church, 50- 52 Cornell Street, Amsterdam, NY 12010.  On Saturday, October 13, 2018, at 1 o’clock, A Mass of Christian Burial will be offered at the church.  All are welcome to attend. Additionally, there will be calling hours held on Saturday, October 20th, 2018 at Dorans Funeral Home, 4 East Bayard Street, Seneca Falls, NY, from 11am to 1pm with a private burial at the convenience of the family.  A celebration of life will be held following calling hours.

In lieu of flowers, donations can be made to Archer and Elle Jackson and Isaac Dyson for their futures.

To send flowers to the family or plant a tree in memory of Robert Dyson, please visit Tribute Store
Friday
12
October