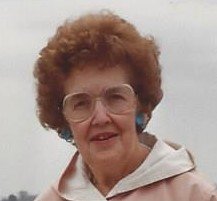 Mrs. June Beverly Michaud, age 88, of Gloversville, went home to the Lord on Sunday March 24, 2019 at Mountain Valley Hospice House, Gloversville, with her family at her side.

She was born February 10, 1931 in Gloversville, the daughter of the late Milo and Mary Hille Kingsbury. She was a Civilian Aircraft Observer/Spotter during WWII and was later employed as a secretary/bookkeeper by Community Heritage of Gloversville for over 20 years. She had previously worked at JBF Industries and Perrella Glove  Shop.

June was a member of Trinity Anglican Episcopal Church, the Sacandaga Swingers Square Dance Club and she was a Girl Scouts of America Leader.  She enjoyed camping, hiking and spending time with her family. She also enjoyed arts and crafts, Easter egg hunts and was a "skilled seamstress" LOL. She was tender-hearted and cared for all creatures, great and small. She took in anyone and anything that needed a home.

In addition to her parents, she was predeceased by her brother, Milo Ray Kingsbury Jr.

The family will receive relatives and friends from 10am to 12pm Saturday, March 30, 2019 at Walrath & Stewart Funeral Home, 51 Fremont St, Gloversville where a Funeral Service will follow at 12pm with the Rev. William Andrist officiating.

Interment will take place at a later date at Prospect Hill Cemetery, Gloversville.

To send flowers to the family or plant a tree in memory of June Michaud, please visit Tribute Store
Saturday
30
March

Share Your Memory of
June
Upload Your Memory View All Memories
Be the first to upload a memory!
Share A Memory
Send Flowers