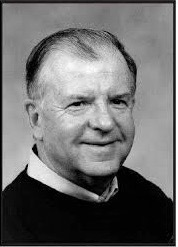 He was born in Amsterdam, NY on February 7, 1932 on the Birthday of his favorite novelist Charles Dickens.  Mr. DeRose was a graduate of the former Wilbur H. Lynch High School in the class of 1949.  As a student, he wrote and directed variety shows for schools assemblies.  At the age of seven he became as student of the late Augusta Canale, a local piano teacher and over the years became an accomplished pianist.  Following graduation he attended Ithaca College and received a Bachelor of Science Degree in 1953.  At Ithaca he performed in many drama productions, his favorite role was that of Polonius in Shakespeare’s “Hamlet.”  In his senior years, he was awarded the Best Actor Award in the Annual All School Musical “Scampers.”  At the college, he was the President of Theta Alpha Phi, The National Dramatics Fraternity and was a member of Kappa Gamma PSI, a musical fraternity.

Upon graduation he received a two- year teaching fellowship to Butler University in Indianapolis, Indiana.  At the university he taught Drama and Italian Diction.  He directed theatre productions for the University and the Indianapolis Theatre Guild in the famous Hinkle Field House on campus.  He also directed a musical for the Indiana Catholic Theatre Guild.  While at Butler he met the love of his life, Barbara Snodgrass of Frankfort, IN who was there on a full music scholarship and was an accomplished organist.  On November 19, 1955 they were married in the Cathedral of St. Peter and Paul in the City of Indianapolis.   Mr. DeRose graduated with a Master of Science Degree in Educational Administration.   In that same year he returned to Amsterdam with his wife and accepted his first teaching position.  He was hired by Fonda High School to teach English and Social Studies.  He also served as the Drama Coach.

In 1956, he accepted an English and Social Studies teaching position with the Greater Amsterdam School District.  He also began his first nine years as advisor to the student council.  He chose the Ram as the school mascot and started the school’s annual homecoming weekend, a tradition that continues today.  Also under the direction of DeRoses leadership, the student council raised funds to erect the Korean and Vietnam memorials that stand near the steps that lead to the school.  In 1965 he was appointed drama teacher and director and subsequently formed the Amsterdam High School Drama Club.  He directed five productions a year: Children’s Theatre, A Drama, The Senior Play, A Musical and Junior Prize Speaking.

From 1949 – 1979 he served as Drama Director for the Amsterdam Recreation Commission, directing Broadway musicals.  It was noted that he was the first director to cast teenagers in musical theatre productions in upstate New York.  He also directed annual musicals for the Cudmore- Wassel Memorial and Scholarship Fund.  Over his theatrical career, he directed 172 productions.

In 1966 began his administrative career with the district, with his appointment to Building Administrative Assistant and Assistant Principal to John Varoske of Wilbur H. Lynch High School.  In that same years he was made coordinator of one the first teach aide programs in the state.  From 1967 to 1971 he serves as assistant high school principal and from 1971 to 1986 he shared the duties of associate principal with his good friend Claude Palczak.   He served as head principal at the present Amsterdam High School from 1986 until 1995.

Following his retirement, then Amsterdam Mayor Mario Villa proclaimed September 29, 1995 as Bert DeRose Day in Amsterdam.   During his career he received a number of citations from the NYS Assembly and Senate as well as the House of Representatives in Washington.  He was also an honorary member of the Amsterdam Parent Teachers Association and the Knight of Columbus.  In 2016 he was elected to the Hall of Fame of the Amsterdam School District.  In July of 1997, the school district named the Amsterdam High School Auditorium, The Umberto “Bert” DeRose Auditorium in his honor.

Mr. DeRose also served a time as President of the Mt. Carmel Church Council.  He enjoyed serving as Lector and as a Eucharistic Minister at the church.  He also served a time on the Board of Directors for the Montgomery County Office For Aging and as President of the PTA at R.J. McNulty Elementary School.  For a time he taught speech classes at FMCC.  Mr. DeRose enjoyed oil painting, cooking, working in his flower beds and decorating the outside of his home during the various holidays.  He always looked forward to vacations with his family to Maine, Cape Cod, Williamsburg, Charleston, South Carolina, Nashville, Canada and many trips to visit family in Frankfort, Indiana.  He also looked forward to the annual summer reunions with many of his former drama students who came together to reminisce their theatre experiences as performers in DeRose Productions.  He always called them his “Drama Kids.”

Following his retirement, Mr. DeRose was called upon to serve as Interim Principal at R.J. McNulty and Currie East Side Schools.  For a number of years, he went to various elementary schools to read to their students and was often called upon to be a guest speaker at AHS class reunions, something he enjoyed very much.  In the summer of 2019, members of the community and former students came together to honor Mr. DeRose, with a special production, something he enjoyed immensely.

He was predeceased by his parents, James and Anna (Pagliaro) DeRose; and one brother, Ralph DeRose.

Mr. DeRose enjoyed his educational career as a teacher, a drama coach and administrator.  His forty years in the profession was always directed to instill the best in his staff and the many students who were in his charge.  He believed in the following “One hundred years from now it will not matter what my bank account was, the sort of house I lived in, or the kind of car I drove- but the world may be different because I was important in the life of a child.”

Relatives, friends and the community are invited to attend his Celebration of Life on Saturday, December 7, 2019 at 1p.m. at the Umberto “Bert” DeRose Auditorium at Amsterdam High School, 140 Saratoga Avenue, Amsterdam, NY 12010. Calling hours will be held in the Auditorium from 10a.m. – 1p.m.  Private burial will take place in St. Michael’s Cemetery.

In lieu of flowers, contributions may be made in his memory to the Amsterdam Drama Club, 140 Saratoga Avenue, Amsterdam, NY 12010 or to the Alzheimer’s Association, 4 Pine West Plaza, Suite 405, Albany, NY 12205.  Arrangements have been entrusted to the care of Betz, Rossi & Bellinger Family Funeral Home.  Please visit the online memorial at www.brbsfuneral.com

To send flowers to the family or plant a tree in memory of Umberto DeRose, please visit Tribute Store
Saturday
7
December

Share Your Memory of
Umberto
Upload Your Memory View All Memories
Be the first to upload a memory!
Share A Memory
Send Flowers