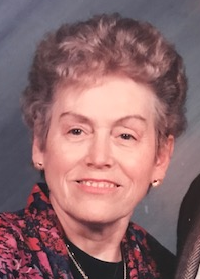 Mrs. Eleanor Lou (Hoffman) Patulski passed away after a short illness ON Monday, December 30, 2019.  At the time she was a resident of the Sarah Jane Sanford Home for Women in Amsterdam, NY.  She was the daughter of the late Fred and Margaret (Gritner) Hoffman.  She was born in March 2, 1929, in Fort Plain, NY.  She attended Fort Plain schools.

On July 31, 1948 she was united in marriage to Edward Patulski.  That union lasted 53 years until his passing on October 6, 2001.  Together they operated a dairy farm in Canajoharie, and belonged to the National Farmers’ Association.

She was also predeceased by her daughters Gail and Darlene; her siblings, William and Leland Hoffman, and Patricia Devost.

A Service of Remembrance will take place on Saturday, January 11, 2019 at 3p.m. at the Lenz & Betz Funeral Home, 69 Otsego Street, Canajoharie.  A calling hour will be held prior to the service beginning at 2p.m. at the funeral home.  Relatives and friends are invited to attend.  Burial will take place in the spring at Canajoharie Falls Cemetery.

In lieu of flowers, contributions in her memory may be made to St. Jude Children’s Research Hospital, 501 St. Jude Place, Memphis, TN 38105.  Please visit the online memorial at www.brbsfuneral.com

To send flowers to the family or plant a tree in memory of Eleanor Patulski, please visit Tribute Store
Print
Saturday
11
January