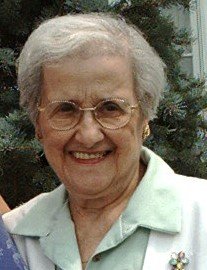 Rosalyn (Roz) Sollecito passed away peacefully at the age of 97 on Wednesday, March 25, 2020 surrounded by her loving family.  One of two siblings Rosalyn was born on July 17, 1922 in Amsterdam NY to Vito Peter Robusto and Grace Martuscello Robusto.  She was pre-deceased by her husband, Vincent Sollecito, Jr. whom she married on November 25, 1950, her precious beautiful son Christopher Sollecito, her brother William (Bill) Robusto and daughter-in-law Jamie Sollecito of Missouri.

She is survived by her loving children, Dr. Vincent Sollecito, III of Ballwin, MO, daughter Donna S. Canestraro and her favorite “only” son-in-law Armand Canestraro.  Rosalyn is also survived by her grandchildren Stephanie E. Sollecito of Wildwood, MO; Cory T. (Jacob) Neusche of Camdenton (Lake of the Ozarks), MO and great grandchildren Hollie Genovese, Taylor and Luke Neusche all of Missouri.  She is also survived by several cousins, nieces, nephews and many friends of all ages.

Rosalyn grew up in the “west end” of Amsterdam and attended Amsterdam schools.  A graduate of St. Mary’s Institute class of 1940 she later attended The Mildred Elley School in Albany under the direction of founder Augusta Mildred Elley herself, graduating in June 1941.  Rosalyn had a long and successful career.  Her work took her many places including the First National Bank of Amsterdam; to serving at the Amsterdam Alcohol Beverage Commission; bookkeeper and secretary for Amsterdam radio station WCSS and as Director of Section 8 housing for Amsterdam Housing Authority, retiring in 1998 after 20 years.  Her life passion outside of her career was her immediate and extended family.

As a result of the birth of her youngest son Christopher, Rosalyn and Vincent became actively involved in the then Montgomery County ARC.  They joined a small group of parents in helping formulate what Liberty ARC is today.  From kitchen tables, to board rooms, a dedicated group of parents of children with special needs worked tirelessly to ensure their children received the support they so needed and deserved.  After Christopher’s passing, Rosalyn and Vincent created a scholarship in Christopher’s name that provided tuition and internships at Liberty ARC for students pursuing careers in Special Education and Occupational Therapies working with individuals with disabilities.

Rosalyn enjoyed writing as a hobby, being first published with an article in “Our Schools” while a 6th grade student at West Spring Street Elementary School and enjoyed writing ever since.  She continued her writing, recounting the events of growing up during the Depression, World War II, illustrating children books and stories, as well as writing poems she readily shared with family and friends.  Her writings from time to time where often featured in local newspapers.  Her other interest included baking and cooking for family and friends, word puzzles, and reading.  She also loved genealogy, researching her family tree meant so much to her.  She always kept it current, adding new information as long as she could.  It pleased her knowing that younger members of her family were also interested, and it gave her great joy to pass on this tradition to the next generation.

The family wishes to extend their heartfelt thanks to all her caregivers on behalf of Rosalyn, especially the loving staff at Ingersoll Place Assisted Living in Niskayuna.  The family would like to say a special thank you to her “little friend” who comforted her daily – she would say that a simple thank you would not be enough.

Rosalyn family wishes to share a special poem she wrote about her journey home:

At last O Lord, the time has come,

How happy I have been!  Life’s been so good thanks to you and thanks to all my kin.

I’m ready Lord but hate to leave my daughter and my son,

but soon I shall be seeing Chris and Vince and I again will be one.

Thank you for all your gifts, and for my wonderful family.

Also, the deceased friends I have had and again I will see.

A fond farewell to all my loved ones, Don’t feel sad for me,

A Mass of Christian Burial will be celebrated on Saturday August 14, 2021 at 11:00AM at Our Lady of Mt. Carmel Catholic Church, 39 St. John St. in Amsterdam with Father O. Robert DeMartinis presiding.  In lieu of flowers, the family requests contributions be made in her memory to LIBERTY ARC, 43 Liberty Drive, Amsterdam NY 12010. To view full obituary or leave a message of condolences, visit https://brbsfuneral.com/.  Her final resting place is alongside her husband Vincent and son Christopher at St. Mary’s Cemetery, Amsterdam, NY.

To send flowers to the family or plant a tree in memory of Rosalyn Sollecito, please visit Tribute Store
Print
Saturday
14
August