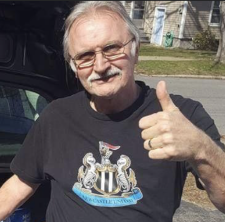 He was born February 18, 1949 in Newcastle, England the son of the late Frank and Analiese Felton. He attended grade school and higher education in England served in the English Navy and was a Lead Machinist for Everett Charles Technologies, of Clifton Park for 38 years. Kenneth was proudly a former professional soccer player for Darlington in England, Azzuri FC in Australia along with other various teams in the United States. He loved to watch the New York Yankees, Pittsburgh Steelers and Newcastle United FC. Kenneth was known as being a busy body, doing yardwork and spending time with his family and friends.

Kenneth is survived by his wife of over 40 years, Darlene Felton; their two children, Jamie and Chris Felton; his brother, Tommy Felton; his sister, Olwyn Sinclair; a brother-in-law, Steve Holland; along with several nieces, nephews, cousins and extended family members.

Along with both of his parents, Kenneth was predeceased by his sister Carol Holland, a sister-in-law Pat Felton and his beloved dog Jeter.

The family will receive relatives and friends from 2:00PM to 3:00PM, Monday July 13, 2020 at Walrath & Stewart Funeral Home, 51 Fremont Street, Gloversville where a Funeral Service will follow at 3:00PM. Those who plan on attending are asked to follow proper social distance practices and please wear a facemask.

Memorial contributions may be made in lieu of flowers to the American Heart Society, American Cancer Society, The ALS Association or to the Brenan Humane Society in Kenneth’s name.

To send flowers to the family or plant a tree in memory of Kenneth Felton, please visit Tribute Store
Monday
13
July

The link to access Kenneth's virtual funeral service: http://webcast.funeralvue.com/events/viewer/32980 (goes live at 3PM 7/13/2020, may have a delay of a few minutes)

Share Your Memory of
Kenneth
Upload Your Memory View All Memories
Be the first to upload a memory!
Share A Memory
Send Flowers