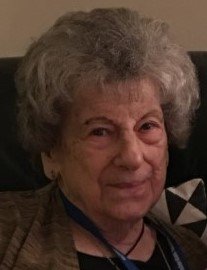 Theresa Veronica Vairo, 96, of Amsterdam, New York passed away peacefully on October 6, 2020 at the Wilkinson Residential Health Care Facility. A life-long resident, Theresa was born on December 1, 1924 in Amsterdam, New York to the late Dominick and Antoinette Corvene. She was united in marriage to the late John Dominick Vairo in September of 1948.

Theresa began working in 1940 at the General Electric Company during the war effort, where she helped manufacture gun turrets for the B-17 bomber. She was later employed in the textile industry in Amsterdam, beginning in 1945. She worked as a seamstress for over four decades, retiring at the age of 67.

Theresa is survived by her son, John Vairo, his wife Caren, and their daughter Eva. Other survivors include many nieces and nephews.

Interment services will be held on Tuesday, October 13th at 10 o’clock in the morning, at Fairview Cemetery with Pastor Josh Wrabel presiding. Memorial contributions may be made in her memory to Mountain Valley Hospice, 108 Steele Avenue, Gloversville, New York, 12078.