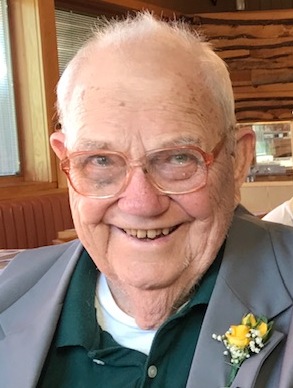 Mr. Edward S.W. Anderson, 93, of Canajoharie, NY died peacefully at St. Mary’s Hospital on Tuesday, February 9, 2021, reuniting with his beloved wife after being blessed with a long and wonderful life. Like his wife’s passing 6 weeks before him, he spent his last hours on earth surrounded by his children. Born in Valhalla, NY on November 24, 1927, he was the son of the late Egon and Grace McClure Anderson.

On June 15, 1947, he was united in marriage to Geraldine Higgins Anderson; a marriage that lasted 73 beautiful years until her passing on December 26, 2020. Their marriage began in Westchester County, NY, where they also welcomed the births of their three children. In 1965, they purchased their beloved 100-acre farm in Mapletown, NY, and relocated upstate full-time five years later, where they spent the remainder of their lives.

Hard-working from the beginning, Ed started his career early in life at age 8 picking apples at Park’s Farm in Harrison, NY for 10 cents a bushel. Even though he only attended school through the 8th grade, Ed was an accomplished builder and skilled carpenter, eventually becoming a partner in CAK Construction where he built many homes. Early in his marriage, he also worked for Bowman’s Florist in White Plains where he enjoyed working with flowers and maintaining the greenhouses, even having the chance to pay homage to the love of his life by officially naming a species of orchid, “Geraldine.” Ed was also a proud member of the North White Plains Volunteer Fire Department where he served as Assistant Chief.

After moving upstate, Ed owned and operated Ed Anderson & Son Carpentry with his son, Ed Jr. Moreso than the homes he built, Ed’s greatest accomplishments in his business came in the form of how many people he employed that got the opportunity to learn carpentry skills and the value of hard work from him. Long after Ed was done swinging a hammer, and right up until the end, he still regularly went “on the job” with his crew, advising on building plans. The business now continues into the 3rd generation with Ed’s grandson, Buck Anderson, working alongside his own father. Ed was also a member of the Ames Volunteer Fire Department.

A nod to his days in the greenhouse, Ed enjoyed caring for his farm by planting flower boxes and beds every spring and growing a fruit orchard his grandchildren loved to play in. Ed also loved rooting for the Mets, being the driver of his and Geraldine’s RV, the “Plum Tree,” and hosting family gatherings; for 25 years he & Geraldine hosted a family reunion for his siblings and their families at the farm. Nothing in the world made him more proud, however, than to be “Pop” to his grandchildren & great-grandchildren, their spouses, and their friends.

Ed converted to Catholicism in the early 1960s and became a devout Catholic as a member of Our Lady of Hope and a former member of St. Peter’s & Paul’s.

Survivors include three children; Geralyn McDowell, Edward Anderson Jr. and his wife, Kathy, and Ryann Young and her husband Rodney; fifteen grandchildren, fifteen great-grandchildren, and many nieces & nephews who all looked up to their Uncle Ed. As a great comfort in their last chapters of life, Ed & Geraldine were well-cared for by their grandson, John McDowell.

Ed’s family would like to thank Dr. Robert Droege, Ed’s longtime physician, for the friendship and care he gave to Ed & Geraldine, as well as the compassionate care the staff at St. Mary’s & Ellis hospitals gave him over the last years of his life.

A Mass of Christian Burial will be held for immediate family at Our Lady of Hope R.C. Church, 115 Reid Street, Fort Plain, NY. Interment and a celebration of life for both Ed & Geraldine will be held in the spring that relatives and friends will be welcomed to attend.

In celebration of Ed’s appreciation for florists, contributions in his memory may be made to the floral fund at Our Lady of Hope Church, 115 Reid St., Fort Plain, NY 13339. Arrangements have been entrusted to the care of Lenz & Betz Funeral Home; a longtime customer and friend, Ed was grateful for his relationship with Pete Rose and proud of the work he did at the funeral home. Please visit the online memorial at www.brbsfuneral.com

To plant a tree in memory of Edward Anderson, please visit Tribute Store

Share Your Memory of
Edward
Upload Your Memory View All Memories
Be the first to upload a memory!
Share A Memory
Plant a Tree