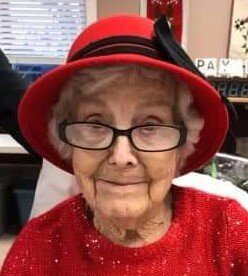 Mary T. Wadsworth, 100, of Fonda, New York, passed away peacefully on October 12, 2021 at the St. Johnsville Rehabilitation and Nursing Center. She was born on December 10, 1920 to Frank and Helen (Murphy) Meaney in St. John’s, Newfoundland.

In 1928, Mary moved with her family to Boston, Massachusetts. In her younger years, Mary worked as a waitress in the Waldorf in Boston, where she met Preston D. Wadsworth, who was visiting port during his training for the United States Navy. On February 28, 1943 Mary and Preston were united in marriage. Eventually, they came to settle on Broadway in Fonda, where they lived for the rest of their lives. The couple shared 66 years together until Preston’s passing in October of 2010.

Once the couple had settled down in Fonda, Mary began waitressing at the Willy Sarris Restaurant, where she worked for many years. Mary was a devoted mother, grandmother, and great-grandmother, who always loved to spend time with her family. She was known to be a social butterfly, and in her free time she always enjoyed taking a shopping trip. On her 50th birthday, Mary finally learned how to drive, after committing her first 50 years to either walking or getting a ride everywhere.

Her loving family includes her son, Lyle P. Wadsworth and his wife Kathleen, of Fonda; her grandchildren, Pamela Wadsworth, of Fonda, and Isaiah Wadsworth, of Palatine Bridge; her great-grandchildren, Cody and Alexis Wadsworth; sisters in-law, Anne Meaney, Beth Meaney, and Genevieve Wadsworth; as well as several nieces, nephews, and cousins. She is preceded in passing by her parents, Frank and Helen, as well as by her husband, Preston, and all seventeen of her siblings.

Mary’s family would like to extend their deepest gratitude to the nurses and staff at St. Johnsville Rehabilitation and Nursing Center for the care they provided to Mary, and making her feel a part of their family for the past five years. They also deeply appreciate all of the guidance and support that the staff extended to Mary’s family, especially during these uncertain times.

Funeral services will be conducted on Thursday, October 21, 2021 at 11 o'clock in the chapel of the Jackson & Betz Funeral Home, 15 Main Street, Fultonville, NY 12072. Interment will follow in the Evergreen Cemetery, Fonda, New York, with the funeral procession passing by Mary's home on Broadway. Relatives and friends are invited, and may call on Thursday, October 21, 2021 from 10 o’clock until 11 o’clock in the morning at Jackson & Betz Funeral Home. In lieu of flowers, memorial contributions may be made in Mary’s memory to St. Johnsville Rehabilitation and Nursing Center, 7 Timmerman Ave, St Johnsville, NY 13452.

To send flowers to the family or plant a tree in memory of Mary Wadsworth, please visit Tribute Store
Thursday
21
October

Share Your Memory of
Mary
Upload Your Memory View All Memories
Be the first to upload a memory!
Share A Memory
Send Flowers