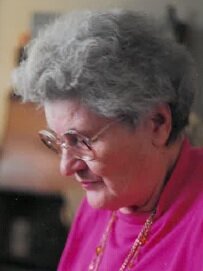 Gladys Joyce (Mucha) Sasowski, 99, of Fultonville, New York, passed away peacefully on March 24, 2022 at the Capstone Center for Rehab & Nursing. She was born in Broadalbin on November 23, 1922.

On November 28, 1947 she was united in marriage to Stephen Sasowski of Fultonville, New York. The couple shared 45 years together, until Steve’s passing on September 3, 1993. Gladys committed herself to raising her four children, and working on the dairy farm with Steve.

Throughout her life, Gladys always enjoyed baking for her family, and taking in the great outdoors. Some of her favorite hobbies were gardening, swimming, and going for walks. Whenever Gladys was visiting with friends or family, she always enjoyed a game of cards or Scrabble.

Gladys leaves behind her children, Marlene (Mitchell) Tepper, Daniel Sasowski, and JoAnne Sasowski; her grandchildren, Nicholas Yates, Alexis Tepper, and Stephanie Tepper; as well as her son-in-law, Jack Yates. Aside from her parents, she is preceded in passing by her daughter, Sandra Sasowski, as well as by her siblings, Mary Robins, John Mucha, Ig Mucha, Jean Scott, Chester Mucha, and Josephine Stroud.

Relatives and friends are invited, and may call on Tuesday, March 29, 2022 from 9 o’clock until 11 o’clock in the morning at the Jackson & Betz Funeral Home, 15 Main Street, Fultonville. Funeral services will follow at 11 o’clock in the Chapel of Jackson & Betz Funeral Home with Fr. Christopher Welch presiding. Interment will follow in the St. Cecilia's Cemetery in Fonda, New York where she will be laid to rest with Steve. Memorial contributions may be made in her memory to the American Cancer Society.

To send flowers to the family or plant a tree in memory of Gladys Sasowski, please visit Tribute Store
Tuesday
29
March

Share Your Memory of
Gladys
Upload Your Memory View All Memories
Be the first to upload a memory!
Share A Memory
Send Flowers