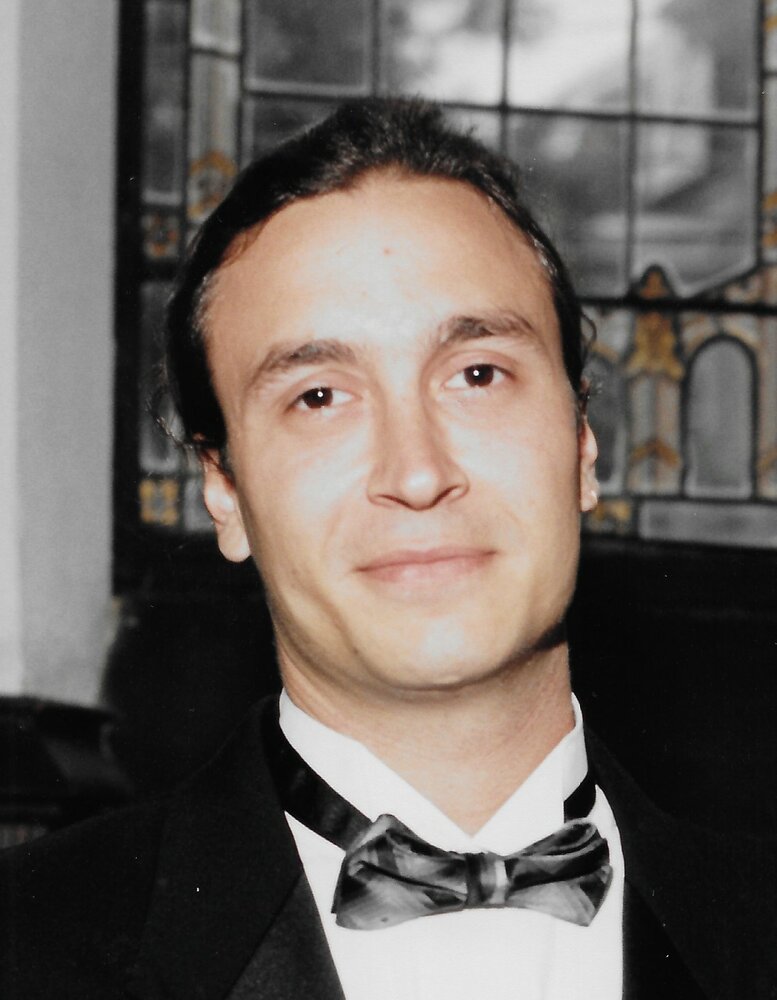 He is survived by his brother Samuel, 55, sister-in-law Alexandra, 55, his nieces Catherine and Caroline, ages 19 and 15, respectively, three aunts, Angela D’Arcangelis Morra, Olga Crastina D’Arcangelis, Rosemarie Herold D’Arcangelis, and a large host of cousins, and other relatives on the Marcellino, Finnessey, Lupo and D’Arcangelis lines of our family.  Gabe was divorced (once) with no children.

“We commend his soul to our Lord, Almighty God, and to the Glorious Virgin Mary, and to our lord Saint Michael, and to all the blessed Angels and Saints, male and female, in Paradise.” - Eulogy of Leonaro da Vinci.

“He was a man, take him for all in all; I shall not look upon his like again.” - Hamlet - Shakespeare

To his only brother Samuel and sister-in-law Alexandra, Gabe was a beloved brother, adventurous and vivacious.  Samuel lived many experiences, too numerous to recount, vicariously through him, and sometimes along with him in ways that wouldn’t have been possible with his brother.  He was proud uncle to his nieces, Catherine and Caroline, whom he considered “formidable” young women, the highest of compliments in his mind.  He was a dutiful and beloved son to both his parents, but especially to his mother Rita, whom Gabe kept and cared for in his home in Long Beach, MS, for 16 years, from her retirement until her death.

Obvious to many people who spoke to him at any length, Gabe was highly intelligent.  He was erudite and extremely well-read in many genres, ranging from science, and science fiction/fantasy, to anthropology and ancient civilizations.  He sometimes played chess on a tournament level with his brother in his 20s.  He applied all his knowledge and intelligence to everything into which he put his efforts.  “Learn as much as you can, as fast as you can.”, might as well have been the family motto, and Gabe lived that motto.

He graduated from Granbury High School, Granbury, TX, in 1986.  For a short time served as President of his class.  He attended some college at University of Texas at Arlington, and excelled there, before deciding on another path of construction, embarking on a variety of careers involving an ever-increasing skill set.  Gabe traveled well outside academic circles like his father Sam, yet he was perfectly adroit and comfortable in academic and any other circle in which he chose to travel.

Both his work ethic and work focus were astounding by any measure.  He loved to work, and had been self-sufficiently employed as early as the age of 17, throughout his life.  For the last two decades Gabriel was a croupier of the highest reputation, all along the Mississippi Coast gaming district.  Prior to that career, he worked gainfully in a number of vocations.  He was proficient in his work as a high-rise construction worker, a carpenter, a mason, an electrician, a bartender, a bouncer, a lab technician both in the rubber industry and in the soft drink industry, and as a cook with a focus on Cajun cuisine (in no particular order and sometimes overlapping in time).  At one point he was studying to be a physicist, an operating room technician, and at another point in his life, he had also studied, qualified and put in for duty as a Merchant Marine, but never followed through on any of those ambitions.  These examples illustrate his deep breadth and potential, which he spent his life maximizing to the best of his ability, caring not about the usual titles or academic trappings.

Gabe loved to travel.  He was fortunate to travel during his life all over the United States, most of that travel being done on motorcycle.  At different points in his life he also traveled internationally, namely, to Canada, Germany, and Italy, and gained so much from the experiences, which he recounted often.

As a young man he was an Adonis, quite athletic and fit.  Among other accomplishments, he successfully ran in the Cowtown (Ft. Worth, TX) Marathon, twice, as a teenager.  He enjoyed many games and sports.  He was particularly versed in baseball and in the nuances of the game.  He was a big fan of jai alai.  He played chess sometimes on the tournament circuit with this brother.  He played all manner of card games.  For years he was in a billiards league.  He fenced with epee and some saber while in college.  There wasn’t anything athletic or even acrobatic that he wouldn’t try, at the least.

He was also a graphic artist, and dabbled in music.  In concert season in high school he played oboe, and percussion in marching season.  Gabe spent many years of his life working in various art media, in canvas painting, in drawing especially with charcoals, in airbrushing, and clay and wood sculpture.

Gabe was all those things, and so much more.  There’s no real way to properly crystallize in a eulogy what was a purely intensive and brilliant life, filled with interesting personal accomplishment, hard work and fantastic experiences.  Throughout his life, no matter what, he was a good and magnanimous friend to all who offered up their friendship to him.  Most of all, Gabe was the best brother a man could ever hope for, whether one was born into the role, or not.

Gabriel Dante D’Arcangelis was an exemplar of a well-articulated, well-rounded Renaissance man, an exceptional man in every aspect of his life.  His presence augmented the lives of everyone he knew and loved.  The World is a lesser place in his absence.  He will be dearly missed by a thousand friends and family until our arrival in the light of Heaven someday, and we shall indeed never again know his like on this Earth.

A celebration of Gabe's life will take place at a later date to be announced.

To send flowers to the family or plant a tree in memory of Gabriel D'Arcangelis, please visit Tribute Store