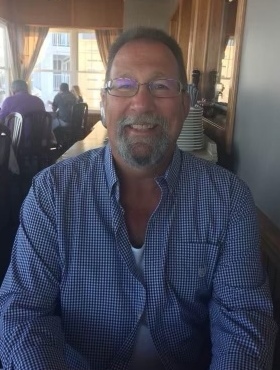 Roger V. Weiner, 68 crossed over the dark side of the moon on October 26, 2022 with his family by his side. Roger was born in Albany, NY on March 7th, 1954 to Bernard and Emma (Foggia) Weiner where he was the baby of the family to brother Michael, and sisters Paula, Teri, and Sandy.

He was a graduate of Fort Plain High School then served in the United States Air Force. Roger married the love of his life, Clara (Countryman) on April 5, 1980 and made her “his Weiner wife.”  Together they built a life and a family settling in Fort Johnson, NY until they got the hell out of NY like they both had dreamed of and moved to Maiden, NC.

After the Air force, Roger made many memories along with friends that became family. He was a jack of all trades and a master of laughs that many appreciated.  Roger was last employed by North East Wood Craft and enjoyed spending his free time sitting in a boat on a lake, some would call it fishing but that would mean he caught fish. He also loved napping in the woods, which others called hunting but that would mean he was successful at it.

Roger is now enjoying time with his parents, Bernard and Emma as well as his sisters, Paula Peck and Sandy Masi.  He is now watching over his wife, Clara (Countryman), daughters, Cortney (Paul Kisielis) of Hagaman and Megan (Weiner) Timian of New Hartford. He also leaves behind a very special grandson, Vincent Timian. We have no doubt that Roger will make his afterlife presence known to his many nieces and nephews. As well as his God son, Bryan Dresser, who will make sure to carry on his sense of humor and God daughter Laura Jones who is like a third parent to his fur child Caesar.

A Mass of Christian Burial will be offered on Saturday, November 5, 2022 at 10:30a.m. at St Ann’s Episcopal Church, 37 Division St, Amsterdam, NY with The Very Rev. Neal Longe as celebrant. After the service we will be sending the big guy off with a celebration of his life at The American Legion, 123 W. Main St, Amsterdam, NY 12010.

Those wishing to share an inappropriate laugh and tales of this legend of a man are welcome to attend calling hours on Friday, November 4, 2022 from 5p.m. until 7p.m. at the Betz, Rossi & Bellinger Family Funeral Home, 171 Guy Park Ave, Amsterdam, NY 12010.

All are invited to attend.  Please note Hawaiian shirts, shorts, and flip flops are not only appropriate but welcomed.

In lieu of flowers, we ask for donations to go to the Veteran’s Outreach Center, 726 Washington St, Utica, NY 13502.

To send flowers to the family or plant a tree in memory of Roger Weiner, please visit Tribute Store
Friday
4
November