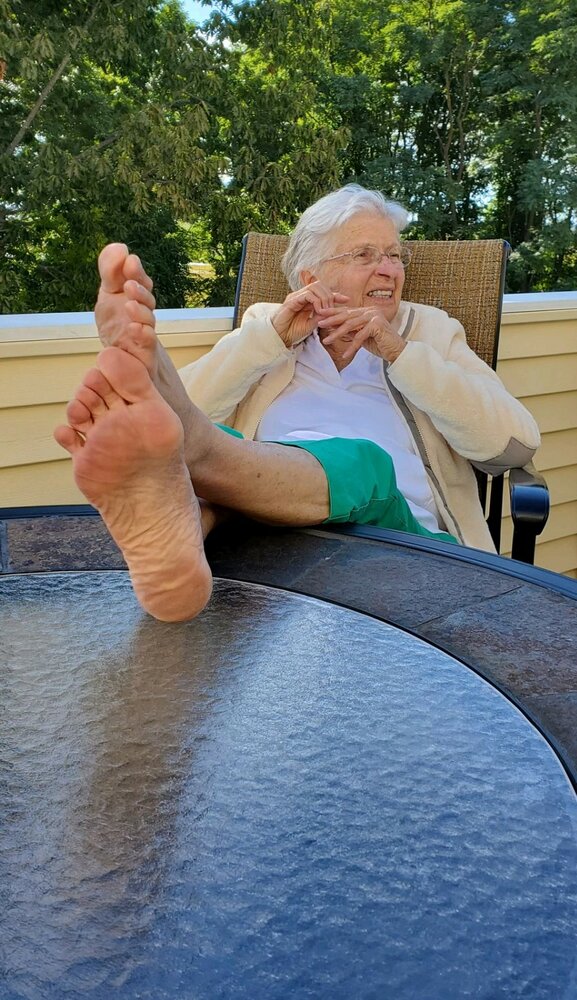 One could hear Gloria’s beautiful voice through the St. Ann’s Church Women’s Choir bring each one a bit more joy and love on the occasion of their Sunday meditation. She loved to sing and seemed to know every song ever written. She was a member of the Mohawk Valley Chorus and Albany Choirs. Born to Veronica Leonteen Hemmer Siwik and Stephen D Siwik of Hagadorn Mills, NY in 1935 Gloria fondly recalls growing up atop the Ft. Johnson hills in her family’s modest home pumping the well in the front yard for the family’s shared bathwater as well as the ‘tom boy’ activities she and her sisters enjoyed there. Gloria excelled while at Cobleskill College while combining school work with a student government office. Gloria would outlive her two husbands, Ernest J. Conti, whom she married in 1958 and with whom she had five children and C. Franklin Bloom with whom she tied the knot on their shared birthday in 1985.

Regularly the energetic Gloria was fanatically collecting and washing any and all clothing and linen lying idly unattended then “Hoovering” the floor beneath hovering body parts, she took on the responsibility of raising children with the hyperactive command Gloria innately possessed. She had her family greatly involved with nearly all the congregational workings of the aforementioned St. Ann’s Episcopal Church in Amsterdam she so loved, from the church’s acclaimed choir, to fundraising spaghetti dinners, to special holiday activities which they all mostly enjoyed together with the other St. Ann’s families. Gloria was elected to the Greater Amsterdam School District School Board for multiple terms, eventually becoming the School Board’s President. While serving on the School Board she fine-tuned her unrelenting, unabashed opinionated personality and confessed to never have suffered embarrassment, unexpected, but nonetheless unsurprising to her frequently embarrassed children. During this time Gloria cared for children, most parents were teachers in Amsterdam Schools, in her home during the week treating them much like her own. Toward the end of her tenure on the School Board she was asked to initiate Amsterdam’s new high school by singing the National Anthem in the gym’s inaugural home varsity basketball game.

Gloria loved visiting the Southern “Down East” Maine Coast and made sure to reserve the last two weeks in August each year with a necessary side trip to visit lifelong friends Bill and Marilyn Rogers in New Hampshire. Beside traveling to Maine each year, the family often drove to visit states up and down the U.S. East Coast, most times staying with friends along the way. Later on Gloria’s traveling would take her to visit her children overseas to several countries in Western Europe and Australia as well as personal trips to China and Japan. Later, with her husband Frank Bloom she enjoyed traveling to Hawaii, Cancun, Alaska, a Trans-Canadian Rail Tour, the U.S. West Coast and Southern States, even living for a while in the Tampa/St. Pete area of Florida. But Gloria was no southerner and eventually returned to the Adirondack Foothills that she loved so much.

Gloria’s family would like to extend their deepest appreciation to the staff of Saratoga Hospital, her physician Dr. Tracey Brennan, MD, Cardiologist Dr. Robert Joy, MD, and the Galway Emergency Medical Services for their attentive care and concern for her health. Because Gloria’s interests and charity was so widely varied, those who wish to should make a donation to the organization they believe Gloria is best remembered by them.

To send flowers to the family or plant a tree in memory of Gloria Bloom, please visit Tribute Store

Share Your Memory of
Gloria
Upload Your Memory View All Memories
Be the first to upload a memory!
Share A Memory
Send Flowers