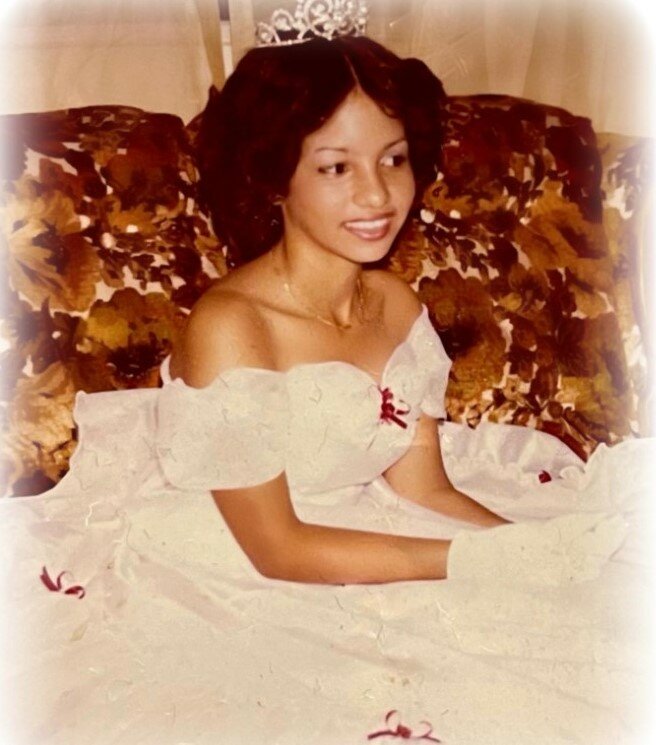 On April 10th, 1967, an angel was born. Aixa Ivelisse Suarez Ortiz. She was born in Guayama Puerto Rico to loving parents Santiago Suarez and Elisa Ortiz. As a young girl Aixa enjoyed many days at the beach and just being carefree. Growing up with her two brothers Alexis and Denny she was well loved and taken care of. As a teen she attended high school and graduated. As a fan of the late and great Michael Jackson, her high school graduation song was “We are the World”. She was into fashion, makeup, and hairstyles and decided to enroll in University in Puerto Rico for cosmetology studies. During her teens she also loved Madonna and dancing.

In 1987 she took a leap of adventure and moved to Brooklyn, NY. It was here she found her signature style, as she was known for her fashionable “city” style. She was also known for her fun free-spirited personality and even had a favorite song “Girls Just Wanna Have Fun” by Cindy Lauper. In 1987 she had the first of her daughters Yesenia Luna. It was then she first enjoyed the warmth of motherhood.

In 1988 she moved to Amsterdam, NY and met the love of her life, Noel Torres. Her and Noel’s relationship was one that was filled with spice, laughter, and the occasional lover’s quarrels, but they always made up. They loved each other like no other. She would spend many years with him enjoying one another’s company and growing their young family. She went on to have her first son Joel Torres in 1990, her second son Jovani Torres in 1994, and Ivelisse Torres in 1998. In her later years Aixa enjoyed spending time with her 5 grandchildren. She not only loved feeding the people in her own home but the community as well. She loved teaching her nieces to cook as well. She was always looking out for other people and just wanting to see them smile.

In 2003 she would temporarily have to say Goodbye to her Love Noel Torres after he suddenly passed away. This was a very difficult time for the family. However, Aixa being a woman of resilience stayed strong despite this grave loss. In 2005, she would find a new love again in her life. This Love was an additional reason to keep on going. This reason came in the form of her third son Anthony Serrano. Aixa’s was once again very happy. Life, however, at times throws us curve balls and this pitch would come in the form of the unfortunate passing of Anthony’s father.

Aixa had to continue forward and remain strong. In order to keep that strength, she turned toward the Lord and started going to church. It was here that she met the man who would become her long-term special friend, Jose Torres Reyes also known as “Cano”, Aixa and Cano would go on to build a special bond. A bond that for over a decade would grow. They would enjoy time together doing things like shopping, cleaning, cooking together, and going for long walks in the park. Even when they disagreed, they often would go their separate ways, only to end up reunited together back at that very same park.

On Jan 20th, 2023, in the early hours of the morning a call was placed. God made his call to Aixa, and she answered. We’d like to believe that she answered in her own way with words similar to “Hola, Mi Amor, Como Estas”. But it was in these earlier hours that she was reunited with the Lord. Her memory is one that will never be forgotten. The spirit of her personality is one that has already stayed with people over the years. We’ll all remember her jokes, smile and most certainly her delicious food.

But if there’s ever a time where it feels like she’s far away, just look to a gentle breeze of the wind, the twinkle of the stars, or the beautiful laughs of a newborn baby and you’ll know that she is with you. She lives on all around us and within her children to whom she is survived by and their children. Her grandchildren Diamond Figueroa, Janoel Torres, Gemmarie Rivera, Edrick Cruz, and Ezekiel Cruz. She’s also survived by her mother Elisa Ortiz, her sister Beatrice Ventura & her brothers Alexis Suarez Ortiz (Lymari) and Dennys Suarez Ortiz. Again, through her family she lives on!

To send flowers to the family or plant a tree in memory of Aixa Suarez Ortiz, please visit Tribute Store

Share Your Memory of
Aixa
Upload Your Memory View All Memories
Be the first to upload a memory!
Share A Memory
Send Flowers