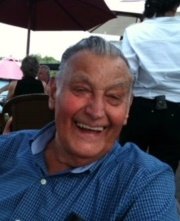 Obituary of Joseph A. Luksis

Born in Amsterdam, New York on March 10, 1924 the son of the late Justinas and Agota Luksis.   Mr. Luksis was a graduate of  the former Wilbur H. Lynch High School in Amsterdam.  He was a lifelong resident of Amsterdam until moving to Scotia in 1992.   Mr. Luksis was a Veteran of the US Army serving during World War II in France.  He was awarded several combat medals and the Purple Heart for being wounded in battle.

Joe had a longstanding career as a clerk with the US Postal Service in Amsterdam.  He recently received an award this past Memorial Day from the USPS in Albany, NY for his distinguished and dedicated service to his country.     He was a parishioner of the former St. Casimir’s Roman Catholic Church in Amsterdam and was a member of the former American Lithuanian Club.  While raising his two sons, he coached CYO  Basketball and was also a Boy Scout Troop Leader.    Most importantly he enjoyed spending time with his family, especially summers at the family camp house on the Sacandaga Lake.

Calling hours will be held on Saturday,  April 14, 2018 from 9:00 to 11:00 AM at the  Betz, Rossi & Bellinger Family Funeral Home, 171 Guy Park Ave.,  Amsterdam,  followed by a Mass of Christian Burial at 11:30 AM at St. Stanislaus Roman Catholic Church, Cornell Street, Amsterdam with Father O. Robert DeMartinis presiding.  Interment with Military Honors will follow in St. Casimir’s Cemetery, Amsterdam.   Memorial contributions may be made in lieu of flowers to the: Disabled American Veterans, 1 Clinton Square, Albany, NY 12207  Please leave condolences online at www.brbsfuneral.com.

To send flowers to the family or plant a tree in memory of Joseph Luksis, please visit Tribute Store
Saturday
14
April