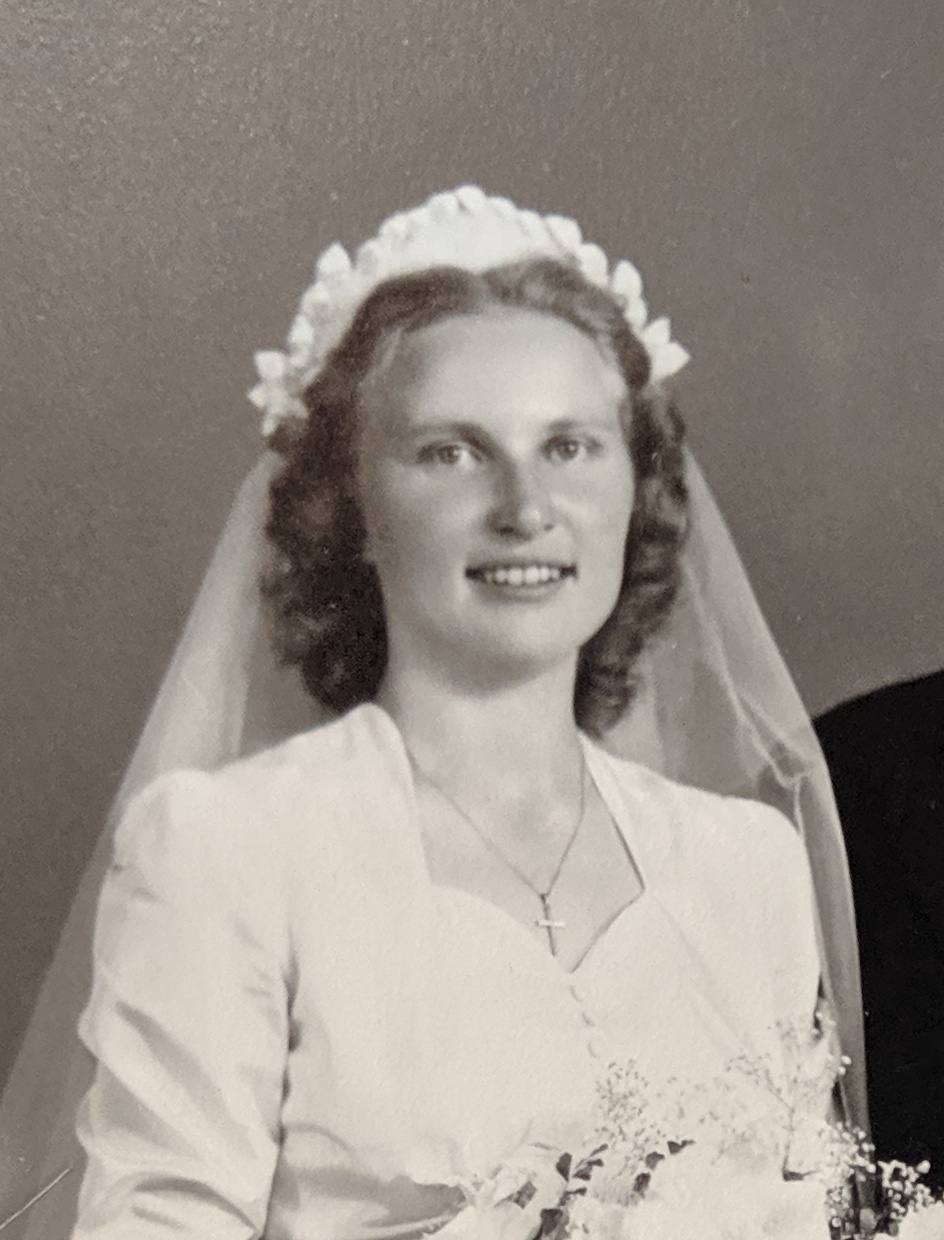 Mariele Levering, 95, a longtime resident of Fultonville- Glen passed away November 7, 2018 in Somers, NY after a brief illness.

She was born in Siegsdorf, Germany, in the state of Bavaria on October 26, 1923 to George and Mary Klauser Huber.  Mary and George emigrated to America and left Mariele and her sisters Elfriede and Hilde in the care of their grandparents.  Mary came back to Germany before the start WWII and lived on their farm with her daughters until the end of the war.

During the war, Mariele worked as a bookkeeper at a quarry near her hometown.  Towards the end of the war as the Americans were coming into Germany to occupy Bavaria, Mariele contracted typhoid fever. She was cared for by a kind American soldier from Iowa, Harold Levering, who was stationed in Mariele's aunt's home. Harold, having access to medical supplies helped nurse her back to health and they fell in love. Harold then returned home to Iowa and later "sent for" Mariele.

On June 22, 1947, Mariele and Harold were married in White Plains, NY. They moved to and lived briefly in rural Iowa near Harold's family where she quickly became homesick for her family. They then moved back to White Plains to be near Mariele's parents and sisters Elfriede and Hilde.

Mariele was employed as a chef at General Motors in Tarrytown, NY, where Harold was a welder. Harold always dreamed of being a farmer, so in the early 60's sought out and found a farm in Fultonville, NY to realize that dream.  Together they operated Levering's Farm on Ingersoll Road until their retirement.

They travelled extensively around the country and saw the beauty that America has to offer. Mariele often joked about being "the hired hand" on the farm.  If she wasn't in the kitchen, she could be found working in the fields on the Ford tractor (her favorite), as well as having an extensive garden growing many vegetables and keeping an eye out for their dogs Sam and Harmony.   Mariele was a devout Catholic and was a member of St. Cecilia's Church in Fonda, NY.  She was also a former member of the Glen- Mohawk Seniors.

Since Mariele & Harold had no children of their own, they graciously welcomed their nieces and nephews to spend summers on the farm to do all the things that were required to make that farm run.  They helped in the fields and garden as well as with cooking and baking which all gave Mariele great pleasure every summer and throughout her lifetime. Those summers made those kids into well rounded women and men.

Mariele lived alone on the farm after Harold passed away in 2011. In 2015, her younger sister Hilde convinced her to move closer to her in Yorktown Heights, NY.  After leaving the farm she came to love her new condo and spent those last years watching her favorite “horse operas” from her ultra-comfy couch. She was a member of St Elizabeth Ann Seton Church and received home visits and communion from their Eucharistic Ministers.  She influenced many lives in a variety of ways that will keep her in their memories forever. She will be greatly missed.

Mariele was predeceased by her parents Mary and George; her husband Harold; her sister Elfriede "Fritzi" Mader; her nephew, Peter Martin Mader; and her nephew Marvin Brouwer and his daughter Angela.

On Saturday, June 22, 2019, what would have been Mariele and Harold’s 72nd Wedding Anniversary, A Mass of Christian Burial will be offered at 11 o’clock at St. Cecilia’s Roman Catholic Church, 26 Broadway, Fonda, NY.  Interment will follow in Maple Avenue Cemetery, where she will be reunited with her husband.  All are invited to attend.

In lieu of flowers the family is requesting donations be made in Mariele's memory to one of these causes that were very near and dear to her heart: Rosary Hill Home, 600 Linda Avenue, Hawthorne, NY 10532 or Guiding Eyes for the Blind, 611 Granite Springs Road, Yorktown Heights, NY 10598 www.GuidingEyes.org

Arrangements have been entrusted to the care of Jackson & Betz Funeral Home, 15 Main Street, Fultonville.  Please visit the online memorial at www.brbsfuneral.com

To send flowers to the family or plant a tree in memory of Mariele Levering, please visit Tribute Store
Saturday
22
June

Share Your Memory of
Mariele
Upload Your Memory View All Memories
Be the first to upload a memory!
Share A Memory
Send Flowers