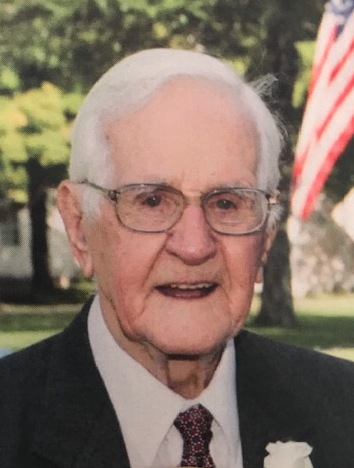 A lifelong area resident, Roger was a graduate of the former Wilbur H. Lynch High School.  He furthered his education at Union College in Schenectady where he obtained his B.A. in Economics.

During World War II, Roger served as a pilot in the US Army Air Force with the rank of Captain. He ferried airplanes to the European Theater and, as a flight commander flew the Hump (Himalayas) in China, Burma and the India Theater with C 54s. He was awarded the Air Metal with Oakleaf cluster and the Distinguished Flying Cross and three bronze stars on his Asiatic-Pacific ribbon.

Recently he was honored as recipient Of the Liberty Medal, the highest honor bestowed upon an individual by the New York State Senate.

On November 30, 1945 he was united in marriage to Elizabeth A. Martin Moran.  Together for nearly 74 years, they shared a wonderful life together.  They made their home in Amsterdam, and raised six children.  Roger went to work for General Electric and worked in the payroll department for 34 years until his retirement.

Roger was a devoted member of St. Luke’s Evangelical Lutheran Church and served on the council.  He was a member of the GE Quarter Century Club and at one time was a member of the International Order of Red Men.  He enjoyed playing tennis until the age of 83, was an avid fisherman, enjoyed dancing and was a NY Yankee fan.  His greatest joy and source of love, was his family.  He will be sadly missed by all who knew and loved him.

He was predeceased by his two sons, David and Jeffrey Moran; and all of his siblings, Ellen Ruth, John, Frank, Paul, Ray and Edwin.

In lieu of flowers, contributions in his memory may be made to his beloved church or the charity of one’s choice.  Please visit the online memorial at www.brbsfuneral.com