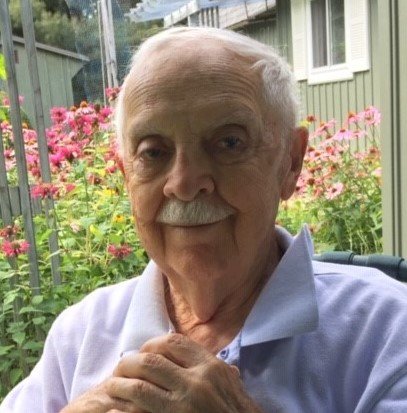 Born on June 4, 1924, in Gloversville, Edward was the son of the late Pasquale and Jennie Caputo. After graduating from Gloversville High School in 1942, Edward enlisted in the US Air Force Troop Carrier Squadron 314, serving in World War II until 1946. Upon his discharge, Edward became a student at the Institute of Design in Chicago taking the accelerated course and graduating in 1949. As a student, Edward’s talent for design was noteworthy and one of his sculptures was featured in an article about outstanding student work in The New York Times. After graduation, he was employed by the Walgreen Corporation in Chicago as a package designer and then at the Gage Printing company in Battle Creek Michigan before returning to Gloversville in 1950.

Upon return to Gloversville, Edward was a self-employed designer for several local companies, including Grando Corp. At the time he noticed that double woven gloves were being produced in solid colors. He suggested using a screening process to apply a pattern and was able to produce this for them, initially in a houndstooth design. In February 1952, the gloves he inspired were featured in Life Magazine. Edward then became employed by the Baronet Litho Company in Johnstown, NY, where he had a successful career in various aspects of the graphic arts including art production, sales, and as General Manager. In 1978, he went on to become a Partner/Manager for Processed Signs and Display in Amsterdam, NY. After he retired in 1986, Edward took courses in etching and printmaking at SUNY Albany where he worked on a Grant to explore techniques for painting on glass and transferring the image to other materials. He enjoyed innovative collaboration with fellow students and their work was exhibited in several galleries and shows in the Capital District. In 2013, Edward was surprised to learn that earlier works of his art were selected by the Bauhaus Foundation to be included in a show of “Chicago’s Bauhaus Legacy” at the Ukrainian Museum of Art in Chicago.

Edward married Beverly J. Barker, the love of his life, in 1955. They were married for 50 years and enjoyed Square Dancing with the Sacandaga Swingers, Golfing, and winter trips to St. Augustine, Florida.

In addition to losing Beverly in 2005, Edward was predeceased by his parents and his Brother, Charles P. Caputo. He is survived by his two children, Julie A. Caputo, of Ocean Grove, NJ and Donald E. Caputo of Chelmsford, MA ; as well as two Nieces, Patti DeFilippis and Cheri Spies.

Edward was a member of the Church of the Holy Spirit. An avid golfer, he had memberships at many local golf courses over the years and up until his early 90’s was still enjoying his golf outings at Nick Stoner Golf Course. He served on the Gloversville Water Board for many years and was a former member of the Eccentric Club. More recently he was an honorary member of the Board of Directors of the Chicago Bauhaus Foundation.

The family will receive relatives and friends from 9:30 am to 11:30 am Tuesday February 11 at the Walrath and Stewart Funeral Home, 51 Fremont St. Gloversville, where a Prayer Service will follow at 11:30 am with the Rev. Matthew Wetsel officiating.

Interment will take place in the spring at Mount Carmel Cemetery, Johnstown, NY.

Memorial contributions may be made in lieu of flowers to the Nathan Littauer Hospital Nursing Home, 99 E. State St. Gloversville, NY 12078.

To send flowers to the family or plant a tree in memory of Edward Caputo, please visit Tribute Store
Tuesday
11
February

Share Your Memory of
Edward
Upload Your Memory View All Memories
Be the first to upload a memory!
Share A Memory
Send Flowers