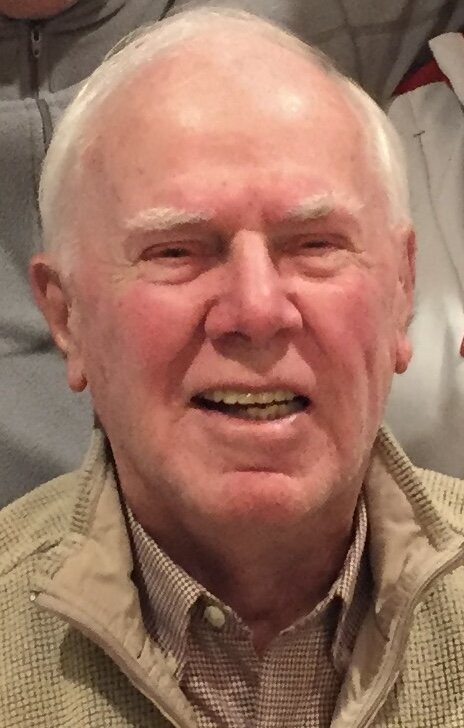 Brendan “Ben” Kenneth Geraghty, passed away Saturday, February 26, 2022 in Pembroke, Massachusetts surrounded by his loving children. Brendan was born on September 19, 1928 in Little Falls, New York. He was the son of Michael and Anne Geraghty (Derrig) and youngest of seven siblings, James, John, Mary, Martin, Michael, Teresa (Becker) and Alfred, all who predeceased him.  Soon after his birth, his family moved to Gloversville, New York, where Brendan embraced his small town roots and enjoyed all things related to family, friends and sports.

Brendan was a standout athlete at Gloversville High School, excelling in football and basketball. After graduating, Brendan played basketball at Siena College for a year, and then matriculated at the University of Notre Dame in South Bend, Indiana.  He graduated from Notre Dame in 1952 with a Bachelor of Arts degree in English.  His English courses at Notre Dame led him to discover another passion – composing poetry, which he did throughout his life, including published works. For those of us who knew Brendan, it was God, Country, Family and Notre Dame!

After leaving South Bend, Brendan traveled to Washington D.C. and became a United States Capitol Police officer while attending Georgetown Law School in the evenings. In DC, Brendan met a dark-haired beauty from West Virginia, Anna, who quickly became the love of his life. Brendan and Anna were married and started their family in DC and then, after his graduation from Georgetown Law School, they moved back to Gloversville in the early 1960s with four children in tow.

Brendan and Anna continued to expand their family in Gloversville, while Brendan began a two-decade career in urban renewal, city planning and public development.  Brendan also would spend several nights a week inside the basketball gymnasiums of Gloversville, Bishop Burke and Johnstown, broadcasting the games for WENT.  For those that listened, Brendan’s play-by-plays were always ones for the ages!

Brendan’s career took the family to Dayton Ohio, and then to Massachusetts, where he continued his public service work.  As was his character, when opportunity knocked, Brendan answered the door, so when his brother Martin asked him to join the Martin J. Geraghty Company in the early 1980’s, there was no hesitation. Brendan helped his brother Marty expand the company with his uncanny ability to be everything to everybody.  Brendan eventually became the president of the company and retired in 1995.

After almost 20 years in Scituate, Massachusetts, where Brendan enjoyed many a round of golf with his crew at Hatherly Country Club, Brendan and Anna retired to Mount Pleasant, SC.  He and Anna thoroughly enjoyed their South Carolina adventure together. They took long walks on the beach, served meals at the food pantry, and became devoted parishioners at Christ Our King Catholic Church.

After several years in the low country, Brendan found his way back to his childhood home of Gloversville, moving to Pecks Lake, NY. Brendan was most at peace at the lake, where he could easily get out for a round of golf at Nick Stoner and enjoy everything the mountains, lake and community offered him. In his later years, Brendan moved to Mattapoisett, MA where he finished out his days just as he lived his life, with a simple smile and twinkle in his eye until the very end.

No matter where Brendan’s travels took him, he always surrounded himself with what he cherished most – his beloved Anna and their family, his friends, a round of golf, and a notebook so that he could write poetry whenever an idea took hold.  His family and friends will miss his kind heart, his keen storytelling, and his ability to make anyone and everyone feel welcome at the Geraghty home.

A Mass of Christian Burial will be celebrated on Wednesday, March 2nd at 10:30 a.m. at the Church of the Holy Spirit, 153 Main Street, Gloversville, NY 12078. Interment will follow at Prospect Hill Cemetery, Gloversville.

Many of you have asked if there will be a way to watch the Mass for Brendan “Ben” Geraghty on your computer. We’re glad to say the answer is “yes” and the details are below!

This is a private Zoom link just for the Mass. When you click on this link, you’ll be asked to enter your email address before joining this online event. Your email will not be shared outside the Geraghty family.

During the Mass, you’ll be able to use the “chat” function to share thoughts and memories of Brendan with the family.

Please note, the Mass is being recorded so if you are unable to watch it live, please let us know and we can send you a recording.

To send flowers to the family or plant a tree in memory of Brendan Geraghty, please visit Tribute Store
Tuesday
1
March

Share Your Memory of
Brendan
Upload Your Memory View All Memories
Be the first to upload a memory!
Share A Memory
Send Flowers