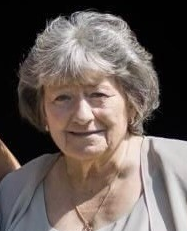 On Monday March 7th 2022  Edith Goldie Gardiner,  84, was called home to be an angel of her Lord. Edith was born January 25, 1938 in Brooklyn, NY to Dean and Edith (Cannata) Gardiner. She was the oldest of 3 children.

Edith graduated from Franklin K Lane High School in 1955 in Brooklyn. She then went on to do 2 years at The Mother House of the Felician Sisters Covent to become a nun. Until she left and met her 1st husband Gordon Youmans in 1958. This union produced 2 children William and Mary. In 1971 she married her 2nd husband Julius Nagy. This union produced 1 child Melissa.  Edith married her 3rd husband and love of her life Richard Lang in 1979. In this union she gained another son to love Eric.

Edith had a long career as an Administrative Assistant for William Mercer. She eventually retired and moved to the Adirondack Mountains. She went on to do many other jobs to pass the time. But none of them as rewarding as the work she did for her churches as a Eucharistic Minister, a Catechist for the children and as a Hospice worker.

Edith enjoyed many hobbies such as : cooking, baking, ceramics, crocheting, camping, fishing, dancing, watching hockey and football. She loved all animals and nature. Edith loved time spent in Blue Mountain with her family and friends.

Edith is survived by her children Mary Sorace of Gold Canyon, Arizona and Melissa Goldblatt of Indian Lake, NY.  Her sister Deanna Curran, her Goddaughter/niece Goldie Boglione, another niece and 2 nephews. 20 grandchildren including Ashlei Bateholts who was her caregiver and 30 great grandchildren. She also leaves behind 3 lifelong best friends Rose Vastano, Bessie Savage and Muriel Green.

Edith was preceded in death by her parents, her brother Dean, her godson/nephew Vincent, all 3 of her husbands, 2 sons William and Eric, and a grandson Sean.

Edith will be remembered by her fiery spirit, her love for cooking and baking. Her love of her faith. Also for the ability to make all feel like family.

A funeral mass will be held on Saturday March 19th 2022 at 11:00 AM at Saint Joseph’s Church on  Main Street in Broadalbin ,NY with a celebration of life to follow. In lieu of flowers donations may be made in her honor to St Joseph’s.  Arrangements have been entrusted to the Betz, Rossi & Bellinger Family Funeral Home, 171 Guy Park Ave, Amsterdam, NY 12010.  Please leave condolences online at www.brbsfuneral.com

Share Your Memory of
Edith
Upload Your Memory View All Memories
Be the first to upload a memory!
Share A Memory