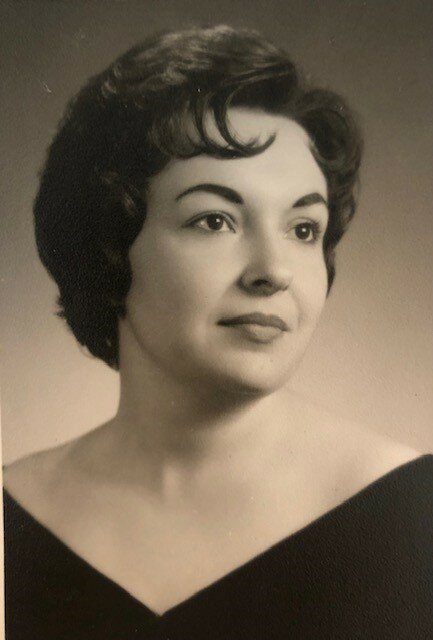 Rita Theresa Marcellino D’Arcangelis, passed away peacefully on Tuesday, the 15th of February, at 9:24 AM of natural causes, under the care of her younger son Gabriel-- in their home in , at the age of 80.

She was preceded by her parents Frank and Rita Marcellino, and her two younger sisters Regina Marcellino Mulligan and Roseanne Marcellino Flint, many years ago, and her husband Sam D’Arcangelis, who passed away almost 16 years ago at the age of 70.

We commend the soul of Rita D’Arcangelis to our Lord, Almighty God, and to the Glorious Virgin Mary, and to our lord Saint Michael, and to all the blessed Angels and Saints, male and female, in .

She was a beloved mother and wife, and pillar of our family.  She was an academician of the highest order starting with becoming valedictorian of her class in 1959 in .  On that basis, she was awarded a full scholarship to SUNY Albany, where she majored in Mathematics, with a Latin minor, culminating in attaining her Master’s Degree in Mathematics, with her thesis focusing on aspects of Galois Theory.

Throughout her career she taught many classes in various mathematical fields at the high school level up through the university level, as teacher or substitute teacher, starting in the Albany, NY area later in Granbury TX, and then finally as a Professor of Computer Science, in Fredericksburg, VA.

She became fascinated with computer science while raising her children to adolescence in , , and attended in , where she graduated with a Bachelor’s degree in Computer Science, as a relatively rare example of a woman in the field of computer science at that time.  She then continued her education at that of at , where she defended her doctoral thesis in Computer Science at the age of 48.

That scholarship led her to her last career move to Fredericksburg, VA, where she instructed in several languages in computer science at the University of Mary Washington (formerly Mary Washington College), until her retirement in 2008, the year after her husband Sam passed.  From there she retired and moved to and lived there with her younger son, Gabriel.

While living in , she gained a fascination and deep thirst for knowledge concerning American Civil War history.  Ultimately she discovered ancestors who fought on the Union side of the war.  This led her to dig very deep into our past, and build a comprehensive genealogy of our own family which we hope to expand and pass on to all, even remotely related through her bloodline.  She became the chief genealogist of many lines of our family, whose greatest work we shall see completed in due course.

For many years, she was a member and a chapter President of the Daughters of the American Revolution, and was also a member Colonial Dames of America, among other organizations.  She spent her retirement enjoying life near the in , living independently in a duplex, across from her younger son Gabriel, in .  She loved talking with her granddaughters about school and life.  She often spent time doing volunteer / charity work, helping senior citizens with free tax filing services.

Rita D’Arcangelis was an exceptional woman in every aspect of her life and our lives, and will be sorely missed dearly by 1000 souls until our arrival in the light of Heaven someday.

Relatives and friends are invited and may call on Saturday, June 25, 2022 from 10a.m. until 12p.m. at the Lenz & Betz Funeral Home, 69 Otsego Street, Canajoharie, NY.  Burial of her remains will follow in the Fort Plain Cemetery, Fort Plain, NY.  Please visit the online memorial at www.brbsfuneral.com

To send flowers to the family or plant a tree in memory of Rita Theresa D'Arcangelis, please visit Tribute Store
Saturday
25
June

Share Your Memory of
Rita Theresa
Upload Your Memory View All Memories
Be the first to upload a memory!
Share A Memory
Send Flowers